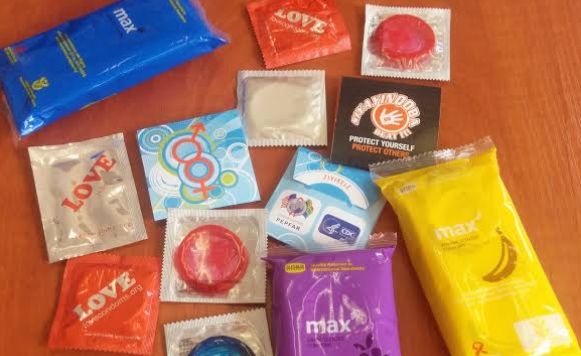 Magoshas thriving from the truck driver clientele on N1

Pulling up at one of the many pit stops along the N1, you are ordinarily met with rows of fuel pumps, refreshment shops and flowery family restaurants.

The chances are you will not notice the group of women sitting on the upturned beer crates behind a truck pit stop on the N1 outside Colesberg.

Niki, [not her real name] like the others lounging nearby, is dressed in an assortment of sexually suggestive attire. In flirtatious tones the group solicit their clients, mostly truck drivers, enticing them with offers of a memorable “quickie” for “only R70”.

For almost a year now, Niki has been assiduously operating at this site. In what she describes as a nomadic trade with a short shelf life, she finds this particular pit stop to be accommodating to her needs.

On the premises, the National Bargaining Council for the Road Freight and Logistics Industry in partnership with Mercedes-Benz, FUSO, Unitrans as well as the Department of Health have put up a mobile wellness clinic to meet the various health needs confronting not only truck drivers and the sex workers but even the occasional odd walk-in patient from the surrounding community.

According to Mlungisi Nqolwana, the clinic co-ordinator, the centre offers more than a one-stop-shop for sexual health services, but also a vast array of health assistance to the said groups.

“Our scope includes tending to common ailments like flu to chronic illnesses such as diabetes, high blood pressure which, given the nature of the trucking profession, tends to be a common hazard.

Operationally the clinic is tailored around the needs of truck drivers and, by default, sex workers. It’s doors swing open at 4.30pm, only closing at 10.30pm and by the time the sex workers have met their night’s first clients they have been provided with condoms and whatever other assistance they might need.

Nqolwana also mentions how he often deals with escorts or call-girls who provide sexual services from private lodgings. Given Colesberg’s location, quite literally in the centre of the country, there has been a steady increase on this side of the sex trade too.

Despite the ANC resolving to decriminalise sex work at its 54th Elective Conference at Nasrec in December 2017, under the Sexual Offences Act of 1957 it remains illegal to buy and sell sex in South Africa.

Groups like Sex Workers Education and Advocacy Taskforce (SWEAT) and Sisonke Sex Worker Movement advocate towards total decriminalisation and a “rights-based” approach to sex work while others have called for the adoption of the so-called Nordic or Equality Model which criminalises only the buying and third-party-end – pimps and brothels of the sex trade.

These groups’ aspirations, however, were swiftly dashed in May 2017 following the release of a report by the South African Law Reform Commission, which favours continued criminalisation, or alternatively compromising to settle on partial criminalisation.

With pronouncements like “prostitution does not fit comfortably into the international definition of decent work” the report has invited considerable criticism, particularly from the sex worker movement and some sections of the feminist fringe who espouse that sex workers should, at the very least, have the final say on their own bodies.

Jolandi Lottering, who works for the NGO Partners to Sexual Health (PSH) with its offices in uptown Colesberg, has been closely involved with local sex providers.

“Our services, given that our project to provide sex workers with the specialised Red Umbrella condom expired three months ago, are now focused on counselling and information services.”

Obviously, she says, given the current legal status of sex work there is little else that PSF can do for them.

“One of the common gripes, for instance, among sex workers is being powerless with clients who refuse to pay for ‘services rendered’ as it were. They are disempowered to open up criminal cases with the police services in such instances.”

This, for 42-year-old Niki, is a common occurrence, although she and her colleagues say they have devised ways around it. “I never keep money on my person,” she says. “I leave it with one of the other girls when going into a truck”.

Originally from Port Elizabeth she has worked the N1 route for over five years before settling permanently in Colesberg.

Unlike certain towns she has operated in, here, she says, provided their dealings are kept away from the glare of mainstream customers, management of the premises seemingly turn a blind eye.

“We never have to deal with mistreatment or being chased off like dogs.”

She lists unemployment as the primary reason for doing what she does. With several mouths back home dependent solely on her, she sees no alternative but to weather all that is associated with the world’s oldest profession.

According to her, girls as young as 18 are “onopaka” (colloquial to nomadic sex workers) – packed and ready to go – hitching lifts on trucks from town to town in exchange for sexual favours. IOL

With the recent record on road accidents and death tolls, motorists have…