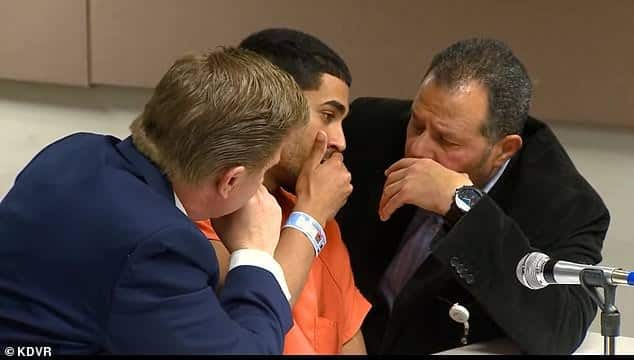 DENVER – A truck driver, Rogel Aguilera-Mederos, 26, has been sentenced to a 110-year jail term for over 27 charges emanating from a fatal accident caused by brake failure on his truck.

Aguilera-Mederos was driving a semi tractor-trailer when the brakes failed and the truck started gaining speed eventually crashing into stalled traffic at 85 mph [136 km/h].

According to an arrest affidavit, Aguilera-Mederos said he lost control of the vehicle after noticing his brakes were failing, but that he had only been travelling at 45 mph at the time. The downhill grade increased his speed as he entered Lakewood, he said.

He didn’t want to drive off the road for fear of rolling the semi, so he tried to manoeuvre to the right shoulder and avoid the stopped traffic on I-70, according to the affidavit.

But he saw the shoulder was blocked by another semi, so he swerved left — back into lanes of slow stop-and-go traffic from a previous crash at I-70 and Ward Road — and closed his eyes, according to the affidavit. The crash, which occurred around 4:50 p.m., caused a massive blaze in the eastbound lanes near Colorado Mills Parkway.

According to Colorado’s First Judicial District Attorney’s Office, Aguilera-Mederos was found guilty in October of 4 counts of vehicular homicide and 23 additional crimes.

According to McCallum, Aguilera-Mederos was sentenced to the shortest possible sentence on all counts, totalling 110 years, to be served consecutively.

Attorney James Colgan, who represented Aguilera-Mederos said, “There will be an appeal as to the facts and mistakes made in the trial.”

Colgan told CNN that Aguilera-Mederos does not deserve to die in prison.

“The issue with this appeal will not be the sentence itself. Under the law, the Court was not incorrect. However, the law, as written, is barbaric and Draconian,” Colgan told CNN.

“There needs to be a change in the law.”

Aguilera-Mederos was not under the influence of drugs or alcohol. Road rage wasn’t determined to be a factor, either.

Outraged by the hefty sentence, the public is asking for Aguilera-Mederos to be granted clemency.

A petition started on Change.org to seek clemency for the truck driver has garnered more than 3 million signatures.

Those sympathizing with Aguilera-Mederos wish to see his sentence reduced. Commenting on the petition, some have suggested a jail term between 5 – 20 years.

According to Change.org, the petition for Aguilera-Mederos is the fastest-growing petition on the website for all of 2021, with more than 45,000 people signing the petition over one hour on Wednesday.

Back home, Aguilera-Mederos’ case brings back memories of the infamous Fields Hill crash in which a runaway truck crashed into a fully loaded taxi killing 24 people back in 2013.

A video of the Fields Hill horror crash captured from the intersection CCTV made headlines worldwide.

Sanele Goodness May, the man behind the wheel of the killer truck, was sentenced to 8 years imprisonment.

May’s employer Gregory Govender, the owner of Sagekal Logistics, was fined R2,000 for failing to maintain a roadworthy vehicle, and R5,000 for hiring an undocumented immigrant.

May has since served his sentence, he was released from Umzinto Prison in January 2020.