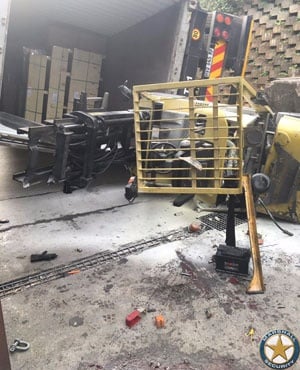 Durban – A man’s leg was partially amputated when he was pinned under a forklift at a business in Glen Anil, Durban, on Wednesday.

A shipping container fell on the forklift operator while he was offloading cargo, Marshall Security spokesperson Kyle van Reenen said.

“The driver of the forklift, a man believed to be approximately 30 years of age, was left pinned between the forklift and the ground. Swift action by the man’s colleagues saw him removed from the wreckage.”

The security company and Netcare 911 paramedic services were called to help.

He said Netcare 911 paramedics worked for over 40 minutes to stabilise the man who suffered a partial amputation to his right leg.

Trucking towards SHEQ successSafety, health, the environment and quality (SHEQ) are vital…
A truck driver sustained moderate injuries after his truck overturned on Flower…