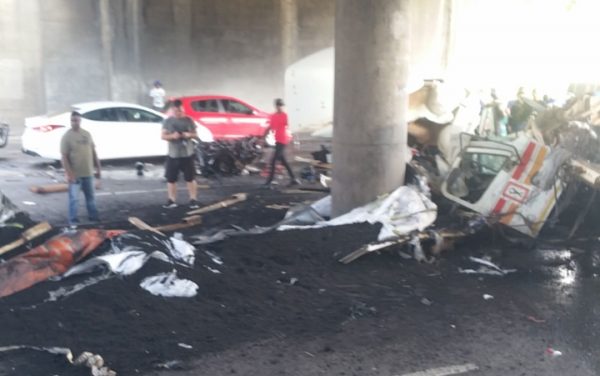 Durban – One person died and two others were critically injured when a truck veered out of control, hit two other vehicles, and smashed into overhead bridge support pillars on the M7 in Durban on Saturday morning, paramedics said.

Just after 11am, Rescue Care paramedics responded to a multiple vehicle accident on the M7 eastbound underneath the N2 bridge heading towards the Bluff, Rescue Care spokesman Garrith Jamieson said.

On arrival, paramedics found “absolute carnage”. A truck travelling down the M7 had somehow lost control and collided with two vehicles before smashing into the pillars of the bridge, he said.

Two people were trapped in the truck’s cabin and one, the truck driver, had been ejected from the wreckage.

Unfortunately, one of the passengers had sustained major injuries and there was nothing more paramedics could do for him. He was declared dead at the scene.

The other passenger and the driver sustained critical injuries and were stabilised on the scene by advanced life support paramedics before the driver was flown by medical helicopter to a nearby hospital.

The critically injured passenger was transported to hospital by ambulance.

The accident scene would take quite some time to clear up and motorists were advised to avoid the area, Jamieson said. ANA

Limpopo – A truck hijacking gone wrong has been blamed for a…