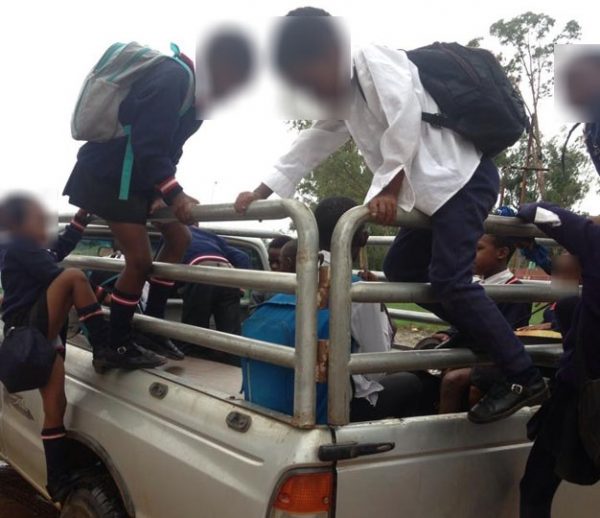 Cape Town – In November 2016, Government has published two amendments to the National Road Traffic Regulations in its National Gazette (No. 40420).

These amendments pertain to laws regulating transport of school children within the load bay of a bakkie as well as speed regulations for heavy goods vehicles.

Howard Dembovsky from Justice Project South Africa says: “If it is meant that the provisions contemplated in regulation 250 (paragraph 2 of that notice) as is contemplated in that gazette shall come into force six months after the publication of the gazette in question, then this means that with effect from May 12, 2017 the transportation of schoolchildren for reward in the goods compartment of bakkies or trucks will be unlawful, regardless of whether such person possesses a permit issued in terms of the National Land Transport Act, 2009 (Act 5 of 2009) to do so or not.”

Subsection (2) of regulation 250 however prohibits any person from conveying persons (children and adults) in the goods compartment of a bakkie or truck for reward unless they possess a permit issued in terms of the National Land Transport Act, 2009 (Act 5 of 2009).

Dembovsky adds: “Neither of these provisions forbids the conveyance of persons in the goods compartment of a bakkie or truck, regardless of whether they are children or not, if they are conveyed without any charge being levied for that conveyance.

“The amendments with respect to regulation 250 of the National Road Traffic Regulations are actually less restrictive than the existing Regulation 250 which states that “No person shall on a public road carry any person for reward in the goods compartment of a motor vehicle” FULL STOP!”

Wheels24 reader Stephinah Segalagala, often monitors scholar patrol monitoring and works for the Road Traffic Management Corporation captured these images of children in the back of a bakkie being picked up from a school in Hamanskraal.

Segalagala says: “I think that will definitely reduce the risks these kids are facing. Law enforcement should visit schools everyday in the morning and afternoon to ensure that school transports are safe, it shouldn’t only be about the money but #KidsSafetyFirst.

She says the bakkie drew her attention which led her to confront the driver: “He told me those kids asked him to remove the canopy but when I had asked those children, they denied. I told them to refuse to be packed like cattle since they are human beings and reminded them about their safety”.

What the readers say

Asanda Sotenjwa: Well I must say, this will leave those who made a living off transporting school children but hopefully they will have means to purchase the appropriate car to continue providing this service safer and legally.

I really hope this new law though will be heavily monitored when it comes to employers who transport construction workers etc. . .that is for me more dangerous because half the time those vehicles are not fully covered and are open (can’t imagine how unpleasant it is in winter to sit behind an open truck or bakkie).

Again though, we can amend the law till we blue in the face if implementation and monitoring are not there it’s really not going to serve it’s purpose because unfortunately not everyone is a law abiding citizen.

Caron Robinson: So we have laws and our legal system is disproportionately organised – how does that help when we don’t have the means to back that up? As long as people are on the wrong side of the law at top levels in government, we’ll see the application of law be selective and we will live with crime as if it’s the norm.

Andre van der Westhuizen (Auckland, New Zealand): There should be a law that NO HUMAN BEING allowed to be transported on the back of a bakkie. Every human being irrespective of race and colour should be treated with respect and not as a commodity which is what a bakkie should only be used for. i.e bricks, goods, etc.

South Africans should be lobbying for this change and stop messing about as to what the law should be as regards to speed etc!!!!!

Get onto it and STOP THE TRANSPORT OF HUMAN BEINGS ON THE BACK OF BAKKIES.

Frederic Opperman: The law doesn’t go far enough. Nobody should be allowed to travel at the back of any open vehicle. Why allow such a dangerous practice. Municipalities should provide school transport.

Clint Lawrence: It doesn’t matter what laws are introduced when nobody enforces the laws. When last have you seen a traffic officer pulling someone over for not buckling they not interested in enforcing the laws

Andrew Morris: Simple rule – no seat, no travel. If you carry passengers it is no the same as carrying livestock or building material – about time SA road users got with the programme and put lives first.

Paul Chinchen: In order to protect the lives of people it is necessary to ensure that no one travels in a vehicle under circumstances in which they do not have the opportunity and the facility to wear an approved seat belt and be seated in an appropriate seat for their physical size.

Durban – At 16H16 Sunday afternoon Netcare 911 responded to reports of…

Translux and City to City bus services, a division of PRASA are…