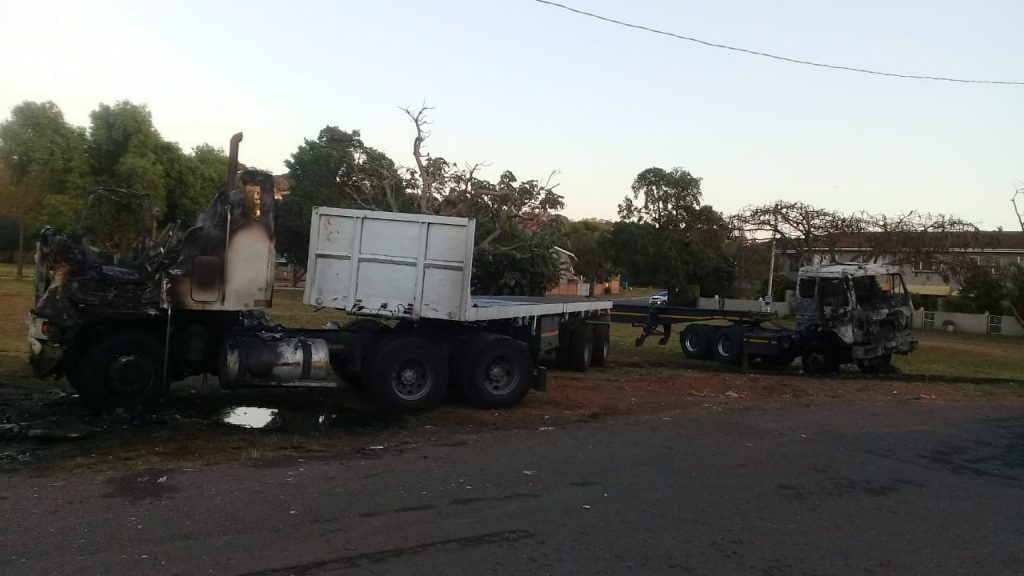 Four ministers met on Sunday over the spate of truck attacks on the country’s roads, saying it was nothing but “economic sabotage” and that steps were being taken to curb it.

The truck driver associations and unions in the freight and logistics sector distanced themselves from the planned strike of September 1 and 2. However, threats and violence, including the burning of trucks, have taken place.

The Ministers for Employment and Labor, Police, Transport and Home Affairs met on Sunday to receive a report on progress made in dealing with the ongoing violence and to decide on a path forward.

During the meeting, it was emphasized that the incidents of sabotage were led by criminal elements responsible for the barriers, the burning of trucks and assets, as well as the intimidation and murder of truck drivers.

According to the ministers, it was decided during the meeting that law enforcement agencies would ensure that state authority is not undermined and visibility increased in violent focal points.

The Department of International Relations and Cooperation will engage with local peers to handle the matter. Joint inspections will be ongoing throughout all provinces to ensure compliance in the sector.

The task team also agreed to draw up a clear plan of action and to provide regular feedback to the joint inter-ministerial task team.

According to the ministers, the incidents are becoming more violent and the police will continue to act against any illegality.

The meeting of ministers comes amid rumors that trucks entering South Africa from neighboring countries will be attacked on Monday.

Information and notices are currently circulating on social media claiming that foreign truck drivers will be attacked on Monday as they drive on South Africa’s roads. Some of the messages also claim that a food and coal shortage will occur in South Africa because trucks will be prevented from entering the country.

Brig. Police spokesman Vish Naidoo said he was aware of the rumors that the round was being made, but there is currently no indication that there is any truth to it.

“We’ve had the same thing twice before this year where these messages are spread and then nothing happened. Our suspicion is that it is being sent around by people who are just trying to cause panic, ”says Naidoo.

However, he says the police are prepared and have the necessary plans ready to intervene should anything happen. “We cannot say that there is any truth in the rumors, but we do not rule out the possibility,” he says.

The International Cross-Border Traders Association Executive, meanwhile, said if there is any truth in the rumors that foreign truck drivers will be attacked on September 2, the agency will prevent all South African trucks, buses and flights from crossing borders to any African country cross.

Meanwhile, after the ministers’ meeting, two trucks were burnt in Woodlands, Durban.

In Cape Town, trucks blocked roads as early as 04h00.

N12 was also blocked at Ogies from Sunday afternoon.

Several unconfirmed reports of drivers being shot at on the N3 highway have been received by SA Trucker.