A mother and her teenage son were killed after their Toyota Yaris collided head-on with a truck on Old Pretoria Road in Olifantsfontein industrial hub on Friday afternoon.

District Manager Media Liaison for Emergency Services, William Ntladi, said the occupants of a light motor vehicle were killed when the vehicle crashed head on with a truck.

“The occupants of Toyota Yaris hatchback, a female driver aged about 35 and a boy aged about 15, both died due to poly-trauma sustained. The truck driver escaped with minimal injuries and wasn’t hospitalised.”

The City of Ekurhuleni Disaster and Emergency Management Services (DEMS) rescue team from Olifantsfontein fire station was notified of the crash by members of the SAPS who reported the crash at 5pm.

“On arrival, the light motor vehicle, was found under the truck with both occupants still trapped and unresponsive.

“Specialised rescue tools (Jaws of Life) were used to extricate the patients.

“Both were declared deceased on scene by paramedics. The entire road had to be closed for the duration of the rescue operations,” said Ntladi.

The scene was handed over to police members who opened an inquest. 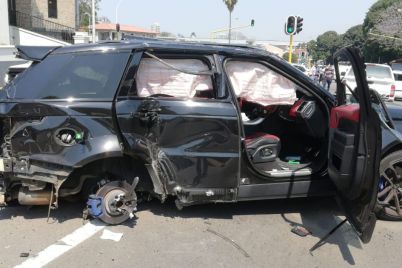 Video footage has emerged of a fatal collision between three cars and a pedestrian in Durban on Thursday. One person…

Truck driver killed after his truck overturns in Letsitele

A truck driver was killed on Wednesday night after his truck overturned on the R71 and R529 intersection in Letsitele.…