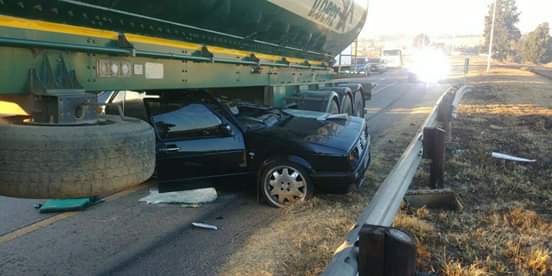 A motorist was seriously injured while his passenger sustained minor injuries when their car collided with a truck on Friday morning.

The crash happened around 07H25 this Friday morning on the N1 North just after the Maraisburg Bridge, Johannesburg.

When Netcare 911 paramedics arrived on the scene they found the driver of the car, seriously injured and entrapped in the wreckage, stuck underneath the truck’s trailer.

His passenger sustained minor injuries, he managed to come out of the wreckage by himself.

Both victims were treated on the scene by Advanced Life support paramedics.

Once stabilised both patients were transported by private ambulance to the hospital for further treatment.

The circumstances leading to the crash are not known.

One killed, 3 injured in N1 truck and car crash in Limpopo