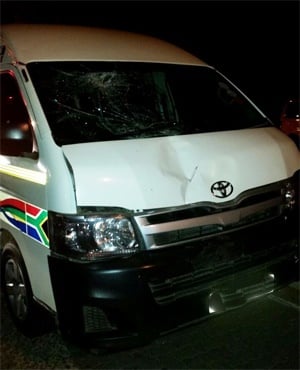 Johannesburg – A minibus taxi driver who skipped a red light and knocked down a jogger was stopped from fleeing the scene when other motorists boxed his minibus in, an eyewitness told News24 on Wednesday.

Kelvin Brown, 27, is still in ICU after the minibus struck him in Pretoria on Monday afternoon.

“At first the taxi stopped after he hit Kelvin, but then he tried to drive away,” Ronquest told News24.

Other drivers used their cars to stop the minibus driver from fleeing the scene.

“The public stopped him and took his information and also photos of the taxi. He stayed on the scene while the public kept an eye on him. According to the people, he didn’t leave the scene with police members.”

Ronquest said he did not know what happened to the taxi driver as he left to go to hospital.

Brown suffered a brain haemorrhage and would undergo surgery on Wednesday.

“The doctors are positive,” Ronquest said.

He said Kelvin ran 14km every day and was less than 1km from his home when the taxi hit him.

No case had been opened with police.
source; news24

CAPE TOWN – Law enforcement has been deployed to the N2 highway…

Johannesburg – A mangled bicycle lying in the bushes on the roadside…