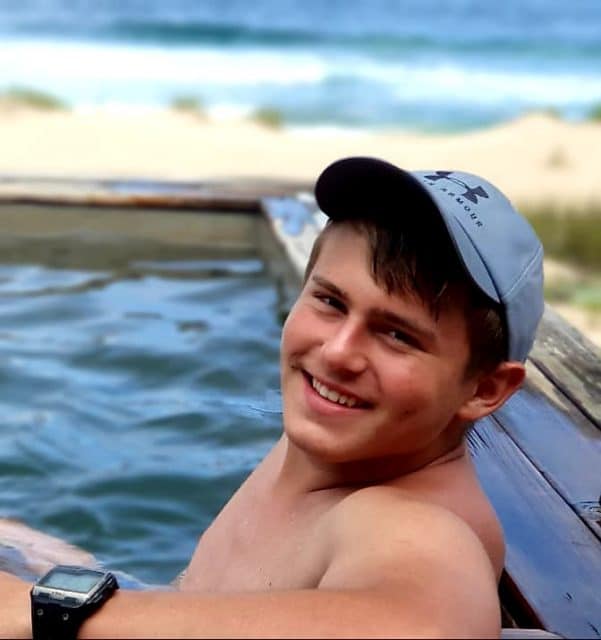 A brave teenager and his grandmother saved the day for two truckers last weekend when they rescued them from their burning truck on the N3 at Townhill, Pietermaritzburg.

They helped the two drivers out of the truck just in time after it overturned on the N3 near Peter Brown in Pietermaritzburg on Saturday and caught fire.

Bailey Trollip (15) and his 58-year-old grandmother, who did not want to be named, were on their way to Ballito on Saturday to fetch two adoptive dogs when they spotted a truck, which was apparently in trouble, on the road.

“We smelled rubber and it looked like the truck was just picking up speed all the time,” Bailey told Maroela Media.

“We drove diagonally behind the truck to maintain a safe distance, but when we came around the bend, the truck had already overturned on the side of the road.”

Without any worries about their own safety, Bailey and his grandmother jumped out of the car, ran across the highway, and slammed the door of the truck’s cabin open.

The truck was already on fire by this time.

“The driver was already halfway out of the vehicle when I saw that his co-driver was almost unconscious and could not get out,” said Bailey.

“He was injured and it seemed as if the flames were starting to touch his legs. I threw him about half over my shoulder when my grandmother came running up. She helped me to get him out of the truck completely.”

The grandson-and-grandmother duo dragged the co-driver away from the truck to safety.

A few minutes later, the entire truck was engulfed in flames.

According to reports, emergency services started extinguishing the fire at 16:00.

Baily’s mother, Vanessa Trollip-Perry, says she and her husband, Ryan Perry, are more than proud of the two’s bravery.

“They ran to help the men without even thinking about it twice,” she says.

“While other motorists were just watching, they saved someone’s father, husband and breadwinner from horrible death.

“It makes a mother’s heart so proud when she sees that her child is doing the right thing, and even more than her own mother also has a hand in it.”

The Witness reports the cause of the crash has not yet been confirmed.