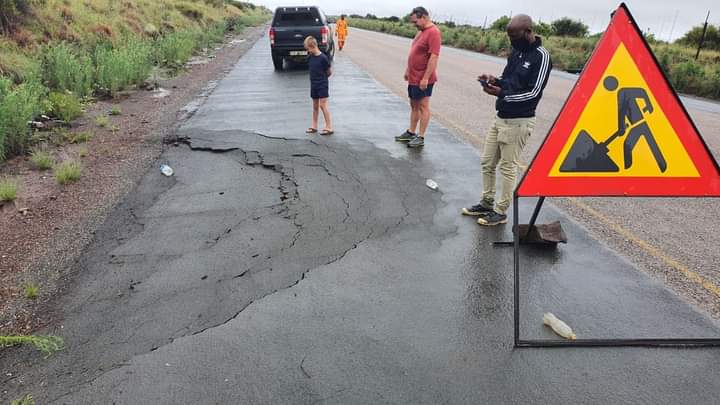 The Kgatelopele Local Municipality in the Northern Cape is urging motorists to travel with caution on the R31 which runs between Danielskuil and Kuruman following the development of huge cracks on the highway.

It’s feared that another sinkhole may be developing as it happened before on the same spot back in 2016.

There is a surface drawdown on the edge of the road, approximately 33km from Danielskuil to Kuruman.

The current occurrence is in the area that was afflicted by a very large sinkhole at the end of 2016 which resulted in the temporary closure of the R31.

It is also in the same vicinity of the scenic sinkhole and a popular deep diving spot, Boesmansgat.

The Department of Roads and Public Works is aware of cracks and is monitoring the situation very closely and a team is on site.

“Warning signs have been erected to caution road users. We are concerned about the safety of all road users and we request everybody’s cooperation, in adhering to the warning signs.

“Road users are requested to please reduce their speed when entering the designated area. The Department of Roads and Public Works remains committed to ensure the construction of safe provincial roads.

“Furthermore we caution members of the public not to spread fake news. The photograph currently circulating on the social media platforms featuring a car that ended in a sinkhole, is fake news.

“We request members of the public not to spread malicious information and instill fear.

“As government we will keep you informed and communicate as the nature of the situation changes,” reads a statement by the Department of Roads and Public Works.

SA Trucker warns all truck drivers to be more cautious, especially side tipper truckers who use the highway to get to mines in Kuruman.