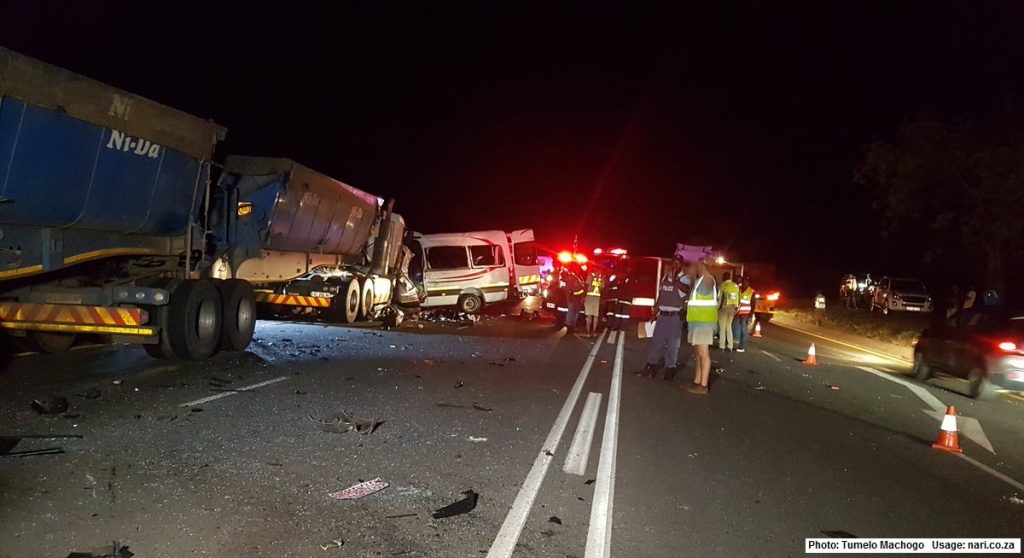 The driver of one of the vehicles involved in an accident that claimed 15 lives on the N4 between Mbombela and Malelane in Mpumalanga on Friday night has been detained by police.

The accident happened on Friday evening when a minibus‚ VW Polo sedan and two trucks collided. The sedan driver has been detained by police‚ according to department of community safety‚ security and liaison spokesman Moeti Mmusi.

“We can confirm that the driver has been detained and police have taken blood samples from him as part of the investigation. We can also confirm that the number of the deceased people has risen to 15 after another person died on way to hospital in the early hours of this morning‚” said Mmusi.

A witness, Alphonso, a Mozambican truck driver who chose to be identified by his first name only, told SA Trucker that the Polo driver unsafely overtook him on a continous line.

“He almost forced me off the road as he abruptly cut off my way to avoid a head-on,” said Alphonso.

Alphonso says he was not surprised to see the Polo wrecked after crashing with the truck just about five minutes after he endured his recklessness.

Mmusi said a task team had been set up by the department to investigate the cause of the accident and he was expected to visit the victims’ families on Sunday.

The drivers of the other vehicles swerved to avoid the overtaking vehicle and that resulted in the four vehicles crashing. The taxi driver died on the spot together with a number of his passengers‚” said Mmusi.

“The investigations are continuing but we can safely confirm that the driver of the sedan has been detained as the police are busy with their investigation‚” he said.

MEC Pat Ngomane was one of the first people to rush to the scene of the accident on Friday night along with provincial authorities.

“The investigation of what happened is already under way and being done by officials‚” said Mmusi.