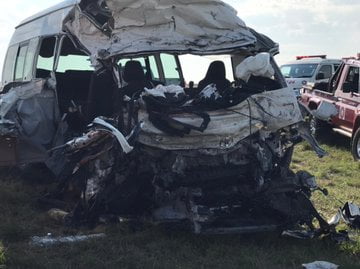 Seven people have been killed in a head-on collision between a taxi and a truck on the R545 between Bethal and Kriel in Mpumalanga on Sunday morning.

Seven adult males between the ages of 25 and 35 died in the horrific head-on crash which happened in the eaarly hours of Sunday morning.

ER24 paramedics arrived on the scene at 2:58 AM to find the truck and taxi off the side of the road.

Five deceased could initially be seen entrapped in the wreck of the taxi.

Once the Fire Department had begun the process of extraction a further two bodies were found.

None of those found showed any signs of life and were declared dead on arrival.

The driver of the truck was unharmed in the incident.

Both the South African Police Services and the LCRC were on the scene for investigations.

A Durban family are awaiting a collision report to help them understand…
Every second counts when you are in a tight situation. This trucker…