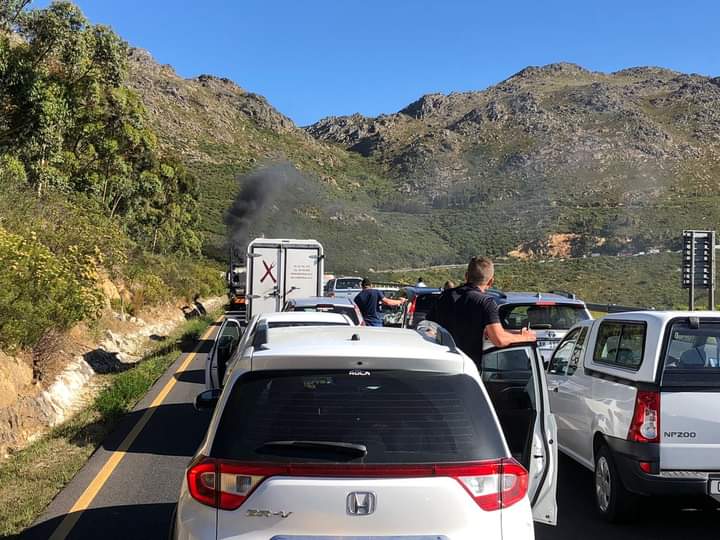 Sir Lowry’s Pass on the N2 was briefly closed to traffic on Friday evening following a massive veld fire which was allegedly caused by a burning vehicle.

@WCLiveTraffic tweeted about a stationary vehicle on the pass at the horseshoe bend on the N2 outbound carriageway at 14h29 on Friday afternoon.

At 17h21, Twitter user, @Hlokan_e, reported the vehicle which was stuck had exploded subsequently lighting up the bush.

@TrafficSA WC (between Somerset and Grabouw) Sir Lowry’s Pass, a 🚐 caught 🔥 both sides of the N2 closed.
🔥 Made into the mounting bush during the explosion, wind making the flames move fast…

According to Winelands Fire Protection Association, the Quick Reaction Team Helicopters were deployed to fight the Sir Lowry’s Pass fire.

The association reported that the firefighters were succeeding to put out the fire despite extremely strong winds.

Traffic was briefly affected in both directions due to the reduced visibility caused by the smoke.

As of 20h07, the situation was looking much calmer on the south lookout point side of the mountain, however, fire high up on the left of the wagon trail, currently burning with strong winds.

Choppers were still on scene but expected to stand down anytime. The fire was still flaring high up on the mountain.

According to WC Live Traffic & Safety Reports, the road was reopened on both outbound and inbound lanes.

In one of its largest fleet deals concluded to date, Mercedes-Benz Trucks…