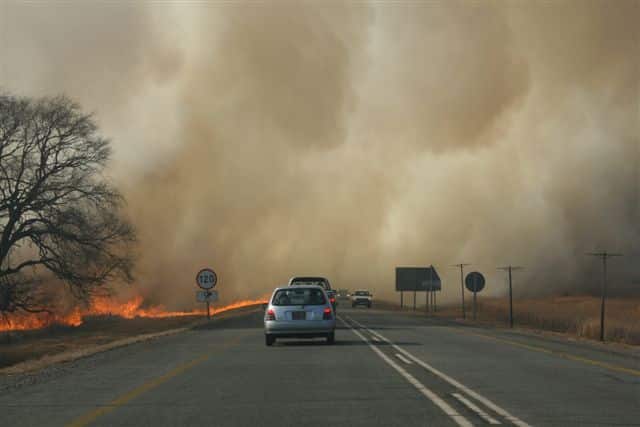 On Thursday afternoon at around 15h56 there was a three-vehicle collision on the N3 between Warden and Villiers. Reports from the scene indicate that thick smoke from controlled burning obstructed the driver’s vision causing the three vehicles to collide.

Paramedics arrived at the scene and found the roadway obstructed with accident debris and the twisted frames of the vehicles. After triaging the injured medics found that four children between five and eleven, and a pregnant female sustained injuries ranging from moderate to minor.

Medics treated the injured at the scene before they transported them to various hospitals for the care that they required.

Tips on driving in Veld and Forest Fires

Left unchecked, veld and forest fires can cause widespread destruction to property. More serious is however the risk posed to the human lives of those traversing in areas prone to veld and forest fires. These risks include not only the fire itself but also the road safety risks of poor visibility caused by smoke and the health risks of smoke inhalation.

It is important for the safety of motorists that we share information on these risks as well as recommendations on how to act if confronted with these dangers. 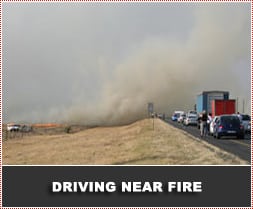 Nature of veld and forest fires

But what are these fires and what should we expect from them? Veld fires can be categorized as “natural” fires and “unnatural fires”

Respect and Awareness of Emergency Operations

The police, traffic officials and fire fighters do their best to avert the dangers form veld fires and to protect the public and motorists from these dangers. They also control crowds near the emergency scenes and will provide the most convenient detour for traffic when roads are closed. It is important that motorists obey and pay close attention to these officials. The following should be kept in mind:

Landowners and especially hospitality and tourism businesses operating in an area where wildfires are a reality should pay particular attention to the protection and safety of their guests and employees. The proper control and management of spreading wildfires involves an integrated approach requiring a well co-coordinated plan to achieve the necessary result.

Any fire strategy should include the following components:

Should the fire be of the magnitude that threatens the whole area, responsible command should be taken by senior staff knowing local conditions. The decision to evacuate an area could have serious consequences. Roads may be unusable due to being engulfed in fire or smoke, traffic or fire fighting equipment. It is impossible for a person to outrun a rapidly spreading wildfire, particularly uphill.

What are the characteristics of a well co-coordinated response?