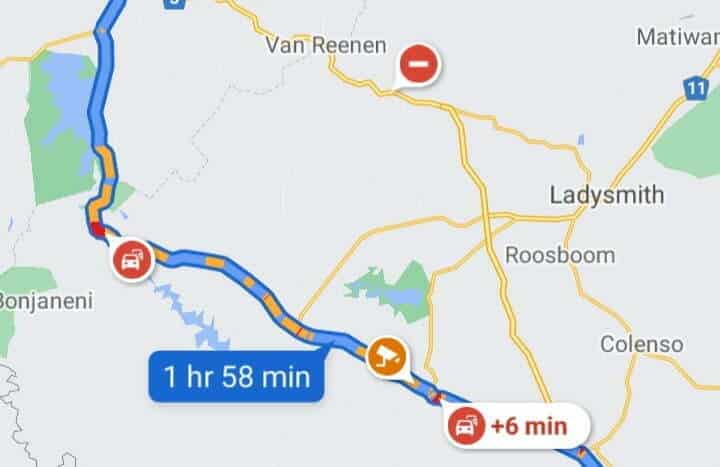 N3 Truck Blockade: Here are the Alternatives if Travelling Between Johannesburg and Durban

Protesting truck drivers have blocked off the N3 at Van Reenen Pass from as early as 04h00 today, Friday 3 December 2021.

The reasons for the drivers to block the key national route that links the country’s biggest harbour in Durban and Johannesburg and was not immediately clear at the time of publishing.

Traffic is at a standstill and heavily backed up on both Johannesburg bound and Durban bound lanes.

Tugela tollgate has been closed.

Here is how to bypass Van Reenen Pass

Northbound traffic should take N3 Exit 194 which is just after the Shell Ultra City garages. The offramp takes you to R74.

Turn right onto R74 towards Colenso,

At Colenso, proceed straight onto R103 to Ladysmith and join N11 to Newcastle.

In Ermelo, join N17 to Johannesburg.

Turn left onto R74 and drive past Winterton and Bergville.

Proceed straight on R74 until you get to the “T” junction with R702, turn right to continue on R74.

At the next “T” junction, turn right onto N5 towards Harrismith and then turn left onto N3 to Johannesburg.

Southbound traffic, if you are already at Harrismith, then follow the reverse direction given above.

KwaZulu-Natal police are working to clear the massive backlog of trucks on the N3 at Van Reenen’s Pass.

“In the early hours of this morning, the N3 at Van Reenen’s was blocked in both directions by truck drivers. It’s alleged that the truck drivers parked their vehicles on the road and in most cases removed the keys from the vehicle. At this stage, SAPS is on the scene and attempts are being made to remove these trucks we’re advising people to avoid that area traffic that is backed up in that area is currently being diverted to alternative routes.”

11h12 03/12 #N3TrafficUpdate: #N3Obstruction N3-6X Km 60 near #VanReenen. The road is currently CLOSED. #TugelaPlaza is CLOSED to #N3JoburgBound traffic. Law enforcement is on scene monitoring the situation. Motorists are advised to delay travel to the area.

At this stage, the cause of the blockade remains unclear.