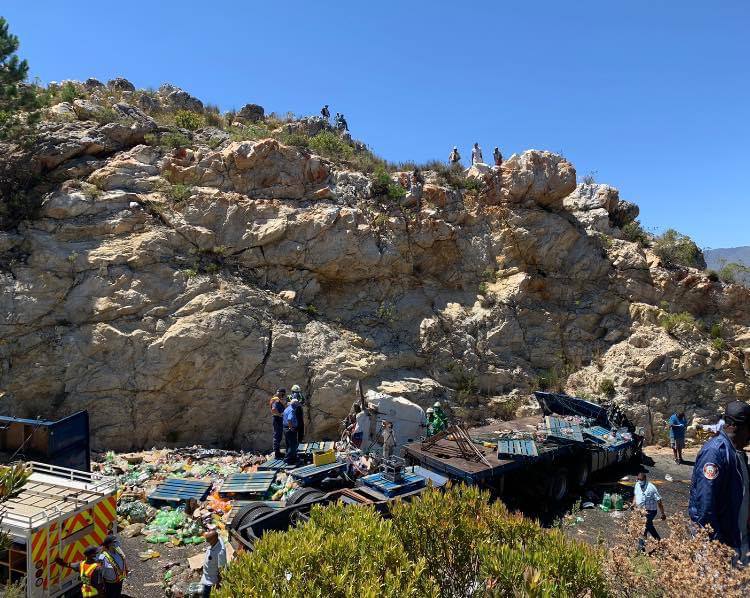 One killed as truck overturns on Houw Hoek Pass near Grabouw

A truck driver’s assistant has sadly lost his life while the driver sustained critical injuries when their truck crashed on the N2 at Houw Hoek Pass near Grabouw on Monday 18 January.

The road heading from Hermanus to Houw Hoek was closed to allow the AMS helicopter to land to carry injured passengers.

Images shared by 1-Second CPT Daily Safety and Security Alerts on Facebook, show a truck overturned and goods from the truck strew all over the road.

It is alleged that the truck driver’s assistant was killed and the driver is in a serious condition, but this is yet to be confirmed.

Traffic services are requesting motorists to use alternate roads to avoid adding to the congestion.

Fatal Heavy Motor Vehicle Crash on the N2 on the Houw Hoek Pass, near Botriver, The AMS chopper is on scene,
All services are on scene
Sadly One male has died( truck driver assistant) and driver is critical. @1SecondLater @BOSBEER2006 @MARIUSBROODRYK @IOL @SABCNews @EWNTraffic pic.twitter.com/5O0y858ABR

JOHANNESBURG – Four people have been declared dead after a horrific car…