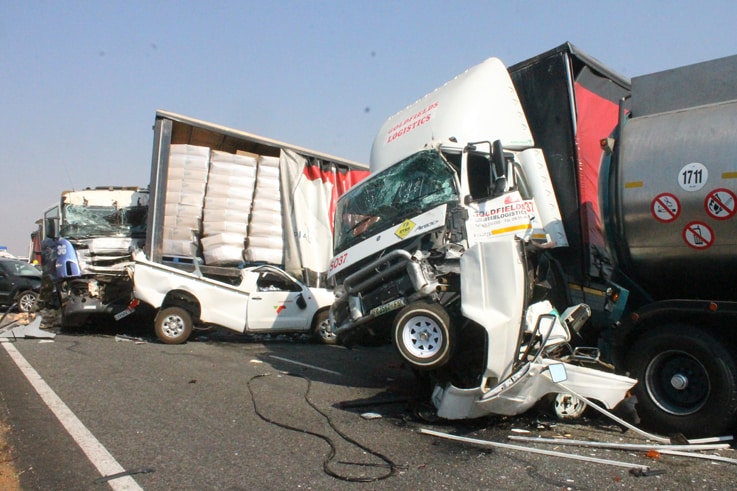 One person died and another was in a critical condition after a multi-vehicle pile-up on the N3 north between the R550 and the Petroport, in Heidelberg. Four trucks with trailers and 10 light motor vehicles were involved in the collision.

Emer-G-Med spokesperson Max Cohen said multiple resources were dispatched to the reports of the incident just after 1pm this on Tuesday afternoon, and when paramedics arrived on the scene, they found a total of four trucks with trailers and 10 light motor vehicles that were involved in the collision.

Cohen said: “On assessment, paramedics found that two people, a driver of a bakkie and a driver of one of the trucks, were in a critical condition and were heavily entrapped within the crumpled vehicles, both requiring rapid Advanced Life Support intervention.

“Unfortunately during treatment one of the trapped patients succumbed to his injuries. He was declared dead on the scene.”

He said paramedics worked to stabilise the critically injured entrapped truck driver while the Ekurhuleni Fire and Rescue Services used the “jaws of life” and other heavy rescue equipment to cut the man free of the vehicle, a extrication process that lasted an hour.

“The Netcare911 Aeromedical Helicopter was activated and landed on the scene, to assist paramedics in stabilising the truck driver. Once freed from the wreckage, the critically injured patient – who sustained massive abdominal, chest, pelvic and lower limb injuries – was airlifted to Netcare Union Hospital, one of two accredited Level 1 Trauma centres in Gauteng,” said Cohen.

He said a total of six other patients sustained injuries ranging from minor to moderate. They were also treated for their injuries on the scene before being transported to various nearby hospitals.

“The exact cause of the collision is unclear. The South African Police Services’s specialist Accident Investigation Unit attended the scene to conduct a full investigation.”

Heidelberg-Nigel Heraut reported that according to Clement Masinge, Fire Chief: Lesedi Fire and Rescue, the accident was caused by dense smoke from a runaway veld fire.

It was further reported that one of the bakkies involved in the collision had been transporting five sheep and one of the sheep was killed in the incident. Dr Steven Olivier, a Heidelberg vet, went to rescue the other four animals and saw to it that they were transported to a nearby farm.