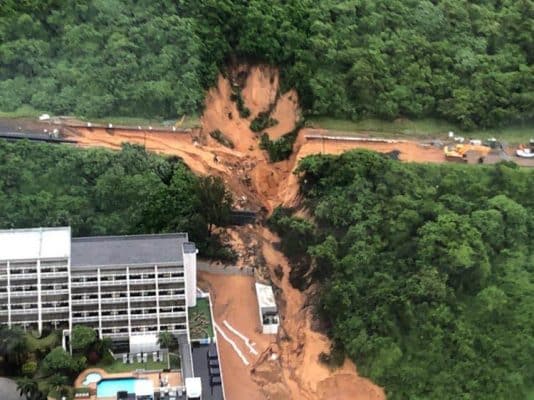 Durban – Following heavy rains in Durban, part of the M4 freeway was washed away leading to the evacuation of at least two homes over fears they could collapse.

Attempts to repair the freeway – which links Umhlanga with the King Shaka International Airport north – have been set back by ongoing rainfall. The road has been closed since last month when it collapsed in heavy downpours.

Metro police spokesperson Parboo Sewpersadh said the occupants of the homes above the M4 were evacuated on Wednesday because they were unsafe.

Acting general manager of Breakers Resort, Nasreen Suleman, said that this week’s rain was at its worst on Wednesday.

She said that heir hotel avoided being evacuated as they were quick to assess the situation and act on it.

“Wednesday was probably the worst day because when I got here they had not diverted the water coming out of a pipe. It was flowing down like a waterfall – almost like a raging river,” she said.

Suleman said they had managed to secure parts of the hotel with sand bags.

“There was a risk that we were going to get flooded but we managed to put sand bags up and we’re all fine,” she added.

She said on Thursday the water flowing through the area was “quite minimal” due to the municipality clearing up the storm water drain.

“The municipality removed the sand build-up from the storm water drain on Lagoon Drive and it has been draining better now.”

Despite this, she said there was still a risk of the gabions – a retaining wall made of stacked stones tied together with wire – being washed away as they were unstable.

On Wednesday, Sewpersadh said that the highway was expected to open in 2020.

Shona Ferguson has passed away, he was 47. Shona died at the…