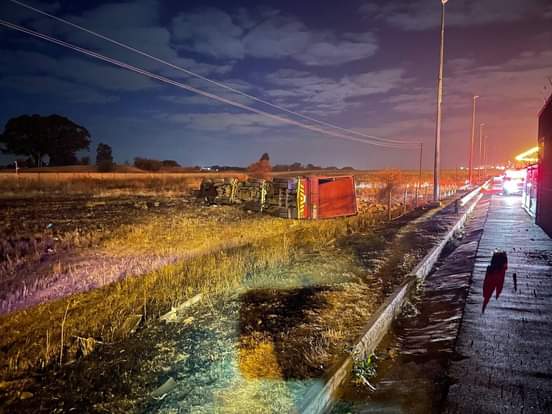 Having tried in vain to free a trucker entrapped following an accident on R21, surgeons had to amputate parts of his legs to save his life.

Netcare 911 spokesperson Shawn Herbst said the crash happened on the R21 near the 1-Stop in Esselenpark on the East Rand.

“Rescue crews worked fervently to free the man, using hydraulic tools. However, due to the mechanism of the entrapment, were not able to do so,” he said.

Herbst said following a consultation between senior medical doctors, a trauma surgeon from a specialised Netcare Emergency Department was brought to the scene to evaluate options.

“As a last resort to save the rapidly deteriorating patient’s life, a surgical amputation of both limbs below the knee was carried out. Once freed, the patient was stabilised by the doctor before being flown by Netcare 911 helicopter ambulance to a specialist facility for the urgent care he required,” he said.

Another trucker was injured in a collision between three trucks on the N1 under the Olifantsfontein on-ramp bridge in Noordwyk.

Herbst said medics assessed the scene and found that the driver of the third truck had sustained serious injuries and required advanced life support to stabilise him.

“Three other patients had sustained moderate patients and were treated on scene before being transported to hospital for further care.”