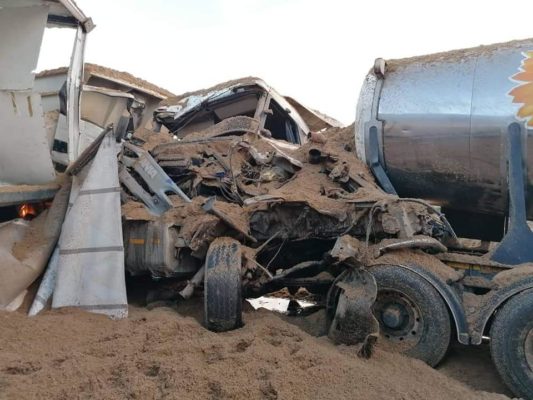 A truck driver died on the spot after he allegedly crashed his truck into the back of another truck at an accident scene in Namibia on Monday afternoon.

According to reports from the scene, traffic was piled up at the accident scene when the truck crashed into the queueing trucks on the road to Hosea Kutako International Airport.

Paramedics on the scene of the accident said the fatal crash occurred when emergency workers were busy removing a damaged truck that jackknifed earlier on the same day.

“The first incident caused an obstruction in the road which the heavier vehicles could not drive past. Three trucks were parked on the road and the fourth driver smashed straight into the last truck’s trailer without slowing down. Three cars that were following the truck crashed into the back of the truck and into each other,” he said.

The cab of the truck that crashed into the stationary truck was completely crushed and emergency workers had to cut the body of the deceased driver from the wreckage with the Jaws of Life.

The occupants of the other vehicle involved in the massive pile-up sustained various degrees of injuries and were transported by ambulance to hospitals in Windhoek for further medical treatment.

None of the emergency workers, who were busy removing the ftruck from the roadway before the pile-up crash occurred, were injured.

The deceased truck driver has not been identified yet.

Durban – A serious truck accident has occurred on the M7 Durban…