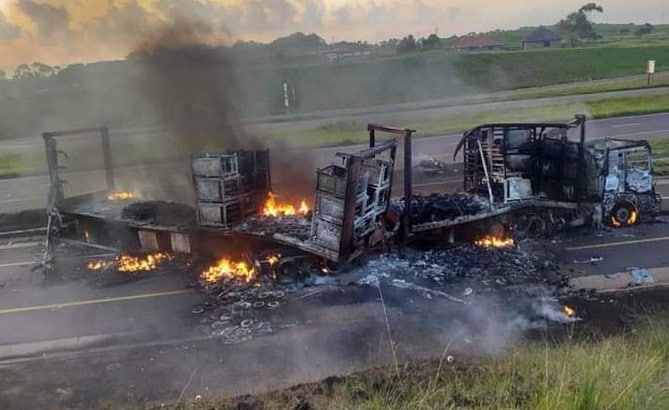 Durban – Several trucks were caught up in a violent protest on the N2 highway between Umgababa and Umkomaas on Wednesday morning.

According to SAPS KZN spokesperson Thembeka Mbele, the community of Danganya was responsible for the protest.

“A group of people from Danganya blockaded both the north and southbound carriageways with burning tyres and stones from as early as 2h30 in the morning,” she said.

At least three trucks were set alight during the protest action.

One truck driver was attacked by the protesters.

He sustained injuries and was taken to hospital for medical attention.

Traffic was heavily affected in the early hours of the morning as emergency workers fought to extinguish the blazes.

She said charges of public violence, malicious damage to property and attempted murder would be opened at Umkomaas police station.

The protest is related to service delivery issues in the area.

Metro police spokesperson Parboo Sewpersadh is cautioning the public to stay away from the area.

He says: “Our public order police and multi-operational response teams deployed to the n2 in Umgababa say that the protesters have regrouped in large numbers and are stoning vehicles. We urge the public to stay away from the area and to use alternate routes, please.”

Metro police and SAPS are monitoring the situation.

DURBAN – Three construction workers have been killed after they were trapped…

The death and burial of Dryton Mpofu, who was a Sabot Transport…

This website uses cookies to improve your experience while you navigate through the website. Out of these, the cookies that are categorized as necessary are stored on your browser as they are essential for the working of basic functionalities of the website. We also use third-party cookies that help us analyze and understand how you use this website. These cookies will be stored in your browser only with your consent. You also have the option to opt-out of these cookies. But opting out of some of these cookies may affect your browsing experience.
Necessary Always Enabled
Necessary cookies are absolutely essential for the website to function properly. These cookies ensure basic functionalities and security features of the website, anonymously.
Functional
Functional cookies help to perform certain functionalities like sharing the content of the website on social media platforms, collect feedbacks, and other third-party features.
Performance
Performance cookies are used to understand and analyze the key performance indexes of the website which helps in delivering a better user experience for the visitors.
Analytics
Analytical cookies are used to understand how visitors interact with the website. These cookies help provide information on metrics the number of visitors, bounce rate, traffic source, etc.
Advertisement
Advertisement cookies are used to provide visitors with relevant ads and marketing campaigns. These cookies track visitors across websites and collect information to provide customized ads.
Others
Other uncategorized cookies are those that are being analyzed and have not been classified into a category as yet.
SAVE & ACCEPT
Total
102
Share
102
0
0
0
0