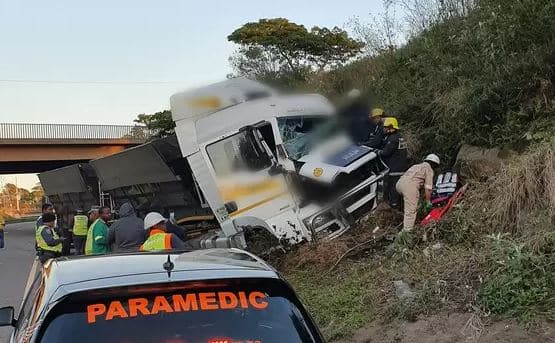 Durban – A man was seriously injured after the truck he was travelling in collided into the rear of another truck on the M7 Durban bound near the North Park off-ramp in Pinetown, KZN just after 5 am on Friday morning.

Garrith Jamieson, managing director of Rescue Care said paramedics arrived on the scene to find the man entrapped in the passenger seat of the truck.

“The Durban Fire Department and advanced life support paramedics were dispatched to assist. While rescuers used the jaws of life and other hydraulic tools to free the man, paramedics stabilised him. The man was freed after about 45 minutes having sustained major injuries to his lower limbs. He was carefully extricated before being transported to a nearby hospital,” Jamieson said.

One lane of the M7 was closed while emergency personal worked on the scene.

The cause of the crash could not be immediately established.

Later three people were injured when three vehicles collided at the intersection of Meller Road and Kings Road in Pinetown at about 2:30pm on Friday.

“Paramedics found the badly damaged vehicles in the roadway. Two vehicles had collided in a T Bone format before then crashing into a stationary vehicle. Three occupants from the vehicles sustained minor injuries and were stabilised before being transported to nearby hospitals for further care. Traffic was severely affected while emergency personal worked to clear the roadway,” he said.

Jamieson said the events leading up to both accidents was unknown however SAPS were investigating.

Pretoria – A truck driver was seriously injured when his truck collided…