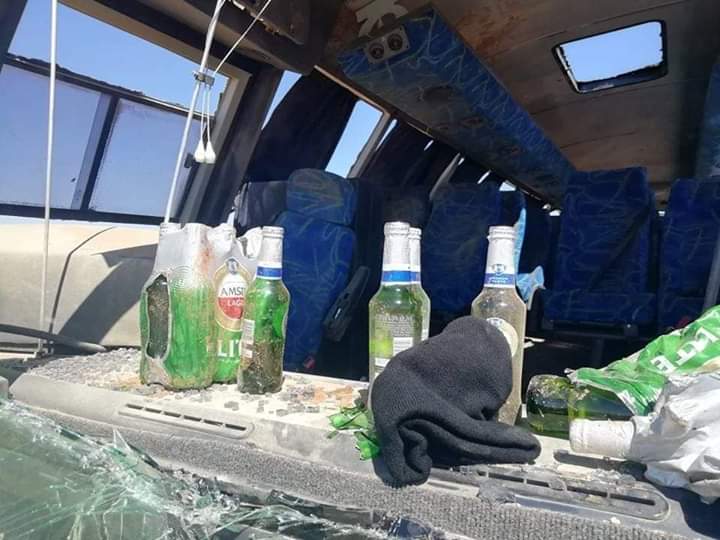 Police in Namibia are probing a bus driver involved in a fatal crash that killed two learners of the Windhoek Gymnasium after revelations that hours earlier the bus crew had looted some beer at a truck crash scene on Sunday morning.

33-year-old Uasora Uanivi was arrested after a breathalyser test on the scene of the accident revealed that he had an excessive amount of alcohol in his bloodstream.

At this stage it is suspected that Uanivi fell asleep behind the wheel of the ill-fated bus before losing control over the vehicle.

According to the acting Khomas Regional Crime Investigations Coordinator, Chief Inspector Freddy Basson, the public’s outcry in the aftermath of the tragedy near Kalkrand initiated the new aspect of the investigation that will determine if the theft of beer from one accident scene could be the possible cause of the second accident.

“We have already started with the investigation process after it was determined that several witnesses saw the drivers of both the buses stop at the scene where a truck transporting beer crashed about ten kilometres outside Windhoek. The truck left the road and ended up at the bottom of a steep incline while it was on its way to Windhoek from the direction Hosea Kutako International Airport in the early hours of Sunday Morning.”

Chief Inspector Basson indicated that officials and civilians at the scene of the truck accident reprimanded both the bus drivers because their vehicles were blocking traffic flow into Windhoek.

“The investigation will be driven by witnesses who actually saw the bus drivers in question at the scene where the beer was looted. In this regard we need as many witness statements as possible and we call on the public to come forward to give such information under oath.”

Rescue workers on the scene of bus accident more than 200 kilometres way from the site where the truck crashed and about four hours later, had to pull the bus back onto its wheels before the Jaws of Life could be used to free some of the children still trapped inside the wreck. At the same time several six packs of beer were found in the driver’s compartment of the bus.

The beer was of the same brand that was looted by people on the outskirts of Windhoek at around 05:00 on Sunday morning.

Chief inspector Basson indicated that if the investigation proves the connection between the two accidents the results would be handed over to the Hardap Police and that such a charge would then be added to the docket of Uanivi who is set to appear in the Mariental Magistrate’s Court on Tuesday 27 August 2019.