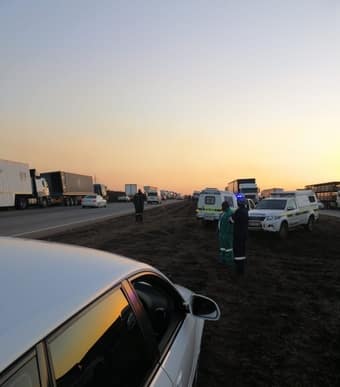 Protester almost run over by truck in Johannesburg – videos

Johannesburg – An anti-immigrant truck driver protester is lucky to be alive after he was nearly hit by his a truck he tried to force to stop in Leondale, Johannesburg on Sunday afternoon.

The man was among a group of alleged ATDF members who were forcing trucks to stop in search of foreign drivers.

The intended victim contacted SA Trucker saying that he saw a group of men ahead of him and as he approached they jumped in front of the truck to stop him but he didn’t slow down forcing them to run for dear life.

Incidents of unidentified people forcing trucks to stop on our roads have increased rapidly raising fears that criminals will take advantage and attack drivers under the pretense of the striking drivers.

SA Trucker have gathered a few of the videos of attacks that happened today, Sunday 01/09/2019.

Posted by Truck Drivers Across The World on Sunday, 1 September 2019

225 Litres of stolen diesel, as well as a Nissan Hardbody bakkie…

RE: HAULIER DRIVER REGISTRATION: PORT OF DURBAN As part of the National…
Durban – More than 350 angry local truck drivers went on the…