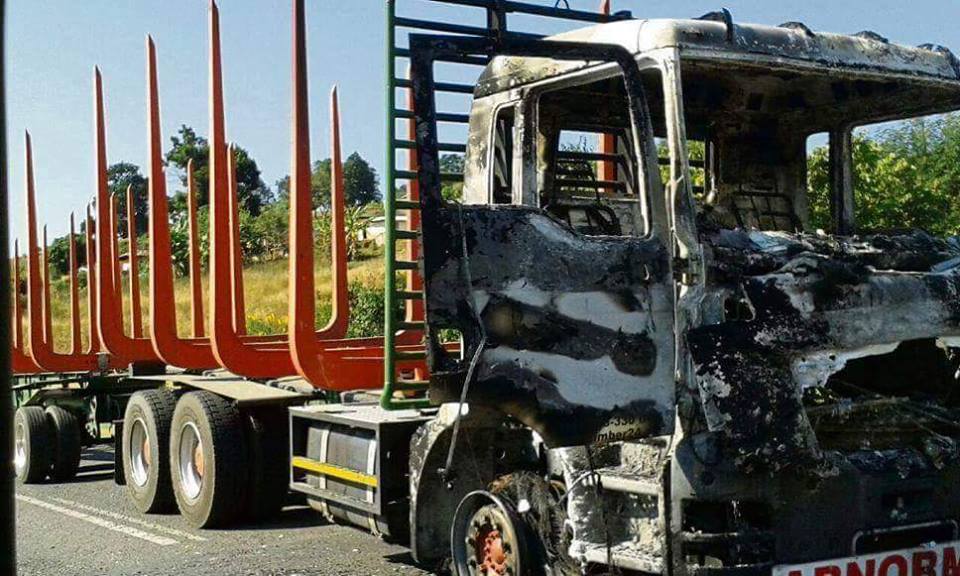 R74, has come under siege allegedly by locals

THE lifeblood of the Kranskop and Greytown farming community, the R74, has come under siege allegedly by locals who are stopping and burning farmers’ trucks.

A Kranskop farmer, who asked not to be named, said a truck transporting his farm’s timber as well as two other trucks were stopped during the course of Tuesday morning and Tuesday night and set alight. The farmer said the trucks had been travelling along the R74 to take products to market when the road was blocked off, allegedly by locals.The drivers, fearing for their lives, ran away while the locals set the trucks on fire, destroying the vehicles and damaging the timber.

“The R74 is the lifeblood of Kranskop and Greytown,” he said. “If the road is closed and trucks are being burned we cannot move our products and sell them.”
Kranskop Farming Association chairperson Rolf Konigkramer said the blocking of the R74 and burning of trucks was a huge concern for the farmers as 90% of farmers in the Kranskop area needed the road to transport their products.
“As soon as the road is blocked or it becomes unsafe for road users, everything comes to a standstill and this has a huge affect on the farming community,” he said.

“We are looking for a police presence to monitor the road, because as soon as the police are seen patrolling, there are no issues.”

Konigkramer said although he did not know the motive behind the burning of the trucks, he knew the people were not obstructing the trucks to steal.
“Nothing was taken off the timber trucks,” he said.
“One of the trucks was transporting furniture and the furniture was stolen, however, I do not think their objective was to steal.”

Head of the KwaZulu-Natal Agricultural Union (Kwanalu) security desk Koos Marais urged police to conduct full-time patrols on the major route. “No one has the right to close down roads or damage property and I hope this is fully investigated,” he said.

KZN police spokesperson Captain Nqobile Gwala said the people blockading the R74 were protesters.
“Protesters blockaded the R74 road, by the Maqumbi, Khazimula and Epulangweni areas.”
She said they blockaded the road with trees and burning tyres, but one truck was set alight. No injuries were reported.

“The reason for the protest is unknown at this stage. A case of public violence was been opened for investigation at Maphumulo SAPS.”Gwala said no arrests had been made, however, police have been deployed to monitor the situation.
source; fleetwatch

Aggressive driving is often demonstrated by drivers who take their anger, resentment…

With the ongoing disruptions in the trucking industry in South Africa, it…