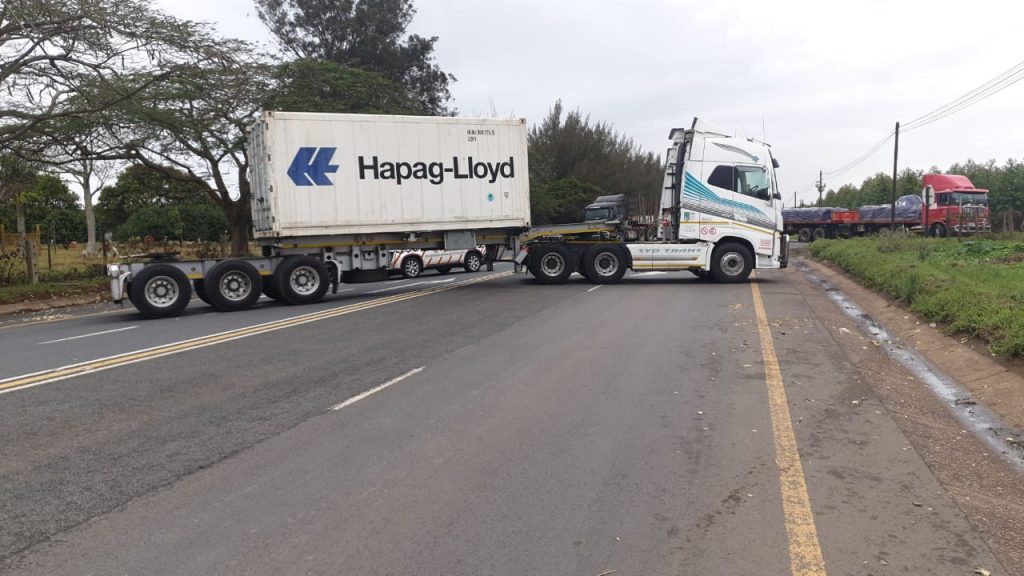 Richards Bay shutdown sparked by the murder of two drivers

Durban – KwaZulu Natal police have arrested 30 people during the Richards Bay shutdown which saw the closure of the busy N2 freeway negatively impacting on local businesses.

It is alleged that the protests stemmed from two murders, one of a bus driver and the other a taxi driver, at the hands of suspected whoonga addicts.

SA Trucker has is reliably informed that the taxi drivers then targeted vagrants and another group of people they believed were supplying them drugs in the Richards Bay CBD.

From Monday, entrance and exit routes to the coastal town were closed.

Yesterday, a driver was forced out of his truck and his keys were taken.

He said the truck was then parked across the road, blocking traffic. The driver, a South African citizen, said the group that accosted him had done the same to other drivers and used their trucks to close off roads.

The involvement of the trucks misled many people to think that they were the ones striking given that they have unresolved issues with employers who they accuse of employing drivers from neighbouring countries ahead of them.

A resident who asked not to be named said the protests had been brewing for two weeks. He said the community was outraged at the deaths of the two men and took action.

The arrests of the 30 protesters further angered the community.

“Now they’re demanding that those who assaulted the whoonga addicts be released,” the resident said.

UMhlathuze mayor Mduduzi Mhlongo advised the taxi drivers to take up the matter with their lawyers.

Dire consequences for the economy

“This protest has had dire consequences for the economy of the province, and the country as a whole. We appeal to all people that when such issues arise, there are ways and means to handle them. They must act within the law.

“The taxi industry is a massive one and if people lose their jobs then this means there will be fewer commuters,” he said.

Taxi industry association Santaco has met taxi drivers in a bid to quell the protests.

Santaco’s Mduduzi Maphunga said they had taken note of the drivers’ plight and would be engaging with their lawyers on how to address the matter and act on behalf of those who had been arrested.

The South African Revenue Service said it had to close its offices due to the unrest.

DA councillor Henning de Wet said businesses were suffering as they had to close down and send people home.

“The functions in the harbour are continuing, but only partially because the trucks are stuck on the N2 and can’t come into the town. We are an industrial town and therefore this is having a ripple effect,” he said. One business person said he had lost close to R100000 because of the protests.

“Some employees didn’t report for duty. We’ve been working with the police to reduce the movement of goods and services,” he said.

“Even a few hours of disruption or job stoppage are a huge threat to investment,” she said.

“A rapid response will be applied to arrest and prosecute the perpetrators or anyone involved in any disruption,” she said.

Durban – A popular trucking company boss and owner of Glazer Motors…
The N3 highway near the Market Road off-ramp in Pietermaritzburg, KwaZulu-Natal was…