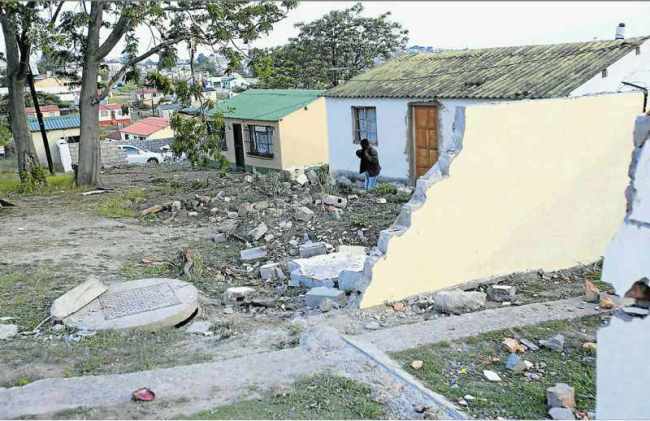 The horrific accident claimed the lives of Azizo Geremiah, four, and Ngcwele Mbuso Mlele, four, who were killed instantly after the truck smashed into them while they were playing in the yard of a NU2 Mdantsane home.

The accident occurred just after 5pm.

The unidentified driver was yesterday said to be fighting for his life in Frere Hospital. He was flipped out of the truck seconds after it crashed into the children. The vehicle then smashed through a wall before flattening part of a four-room house where baby Elihle Bottoman was sleeping.

Eyewitnesses told the Daily Dispatch the tragic incident unfolded when a piece of wire, which was allegedly being used to hold the cab in place, came loose, causing it to flip forward. The driver lost control and the truck left the road.

It then crashed through a wall and careened into the yard where the four children were playing.

Amphiwe Bottoman said she and three other family members were seated in the lounge of their home when they heard a loud bang.

“We all got up and ran. Seconds later the truck crashed into the lounge and bedroom. I lost my mind. It was only when we had come to terms with what had just happened, that I remembered we fled and left baby Elihle sleeping inside the house,” Bottoman said.

The family feared the worst but after going through the wreckage, they discovered Elihle safe and sound.

However, Azizo and Mbuso were not as fortunate. Azizo’s mother had to be restrained from going near her daughter’s lifeless body.

Azizo’s grandmother Kholeka Geremiah was one of the first family members to arrive on the scene.

“I found Azizo covered in a blanket, I identified her and said this is my granddaughter. I then saw her mother approaching from a distance and I called on bystanders to restrain her from coming any closer. It broke her,” Geremiah said.

They were admitted to hospital for minor injuries. Ogiyonke has since been discharged and Ayazingca remains under observation with a cut to the head.

The families have all called on authorities to get to the bottom of the accident.

“In a case such as this, there are no arrests. What we do is to take statements, compile them into a docket and send it to court for a decision to prosecute.”

Speaking to the Dispatch, Mbuso’s uncle Songezo Mlele said: “The law must take its course. If the truck was not roadworthy someone must be held responsible.”

The name of the company that owns the truck is known to the Dispatch. However, a representative could not be reached for comment at the time of writing yesterday. The truck has been taken to a police yard on the West Bank where it will be inspected.

This is not the first truck accident in Mdantsane this year.

In May, a water truck destroyed two RDP homes in Unit P.

The vehicle started rolling down a hill with the driver still inside.

The Dispatch also reported last week how a family of seven, including a frail grandmother, were left to live in a wrecked house after a truck crashed into it.

The crash occurred on the evening of September 18 in NU2.