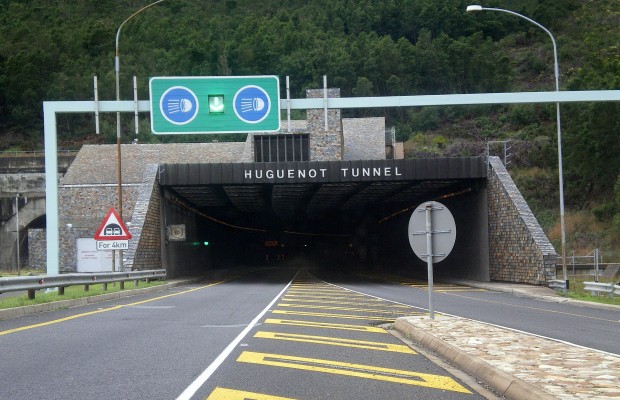 The Huguenot Tunnel on the N1 between Worcester and Paarl could be closed for up to four months in 2019 in order for the South African National Roads Agency Limited (Sanral) to repair and replace safety equipment in the primary tunnel.

Over the weekend it emerged that the equipment was red-flagged as far back as 2015, was fast approaching the end of its shelf life, and that passage could safely be redirected to a secondary tunnel without any delays to traffic flow.

But modernising what it is essentially a service tunnel for safe and smooth passage would have cost Sanral around R2m – money the agency says it doesn’t have.

As a result it has no option but to block off the tunnel to do the necessary refurbishment which could cripple logistics in and out of the winelands basin west of the Hex River Mountains.

Although refurbishing existing safety equipment to the primary tunnel is not as costly as upgrading the service tunnel, the longer-term ramifications of closing the tunnel come at a much higher price to the Western Cape economy and hinterland transport going north east.

Sanral says traffic will have to be diverted over the Du Toitskloof Pass, the original way across the mountains prior to the tunnel’s opening in 1988.

Logistically there are alternative routes from Worcester on the R43 south to Rawston and north to Wellington.

But these routes could lead to lengthy delays and congestion in areas not catering for a spike in traffic.

It means that the Du Toitskloof Pass could once again see the kind of traffic it used to experience before the 3.9km tunnel was opened.

Back then it took an additional 11kms to traverse the treacherous Du Toit’s Peak that’s often shrouded in mist and fog, if not rendered completely impassable by inclement weather.

Conservative estimations say passage through the tunnel is around 30min faster than going up and down the twisty turns of the pass.

On any given day, however, risks such as rock falls and unexpected obstructions can add an hour or more to travel time on the pass.

Sanral says it is waiting for government to advise the agency on alternative revenue models brought on by e-toll non-payment in Gauteng and a recent DA-led Cape High Court case that stopped the agency from tolling highways through the winelands.

At the moment Sanral’s last toll gate upon entering the Western Cape from the tunnel is north of Paarl.

Sanral’s CEO SKhumbuzo Macozoma was quoted over the weekend saying the agency made around R1.1 trillion annually compared to the R2.5 trillion it needed to run operations.

He said only about 30% of road users were helping Sanral to foot the bill for the Gauteng Freeway Improvement Project, and that anti-toll activism elsewhere was severing the agency’s lifeline.

In the meantime it is waiting to hear from the Office of the President, the Department of Transport, and Treasury about alternative revenue streams other than tolling, Sanral’s primary profit-making mechanism.

The agency didn’t say when in 2019 the Huguenot Tunnel might be closed. FTWOnline