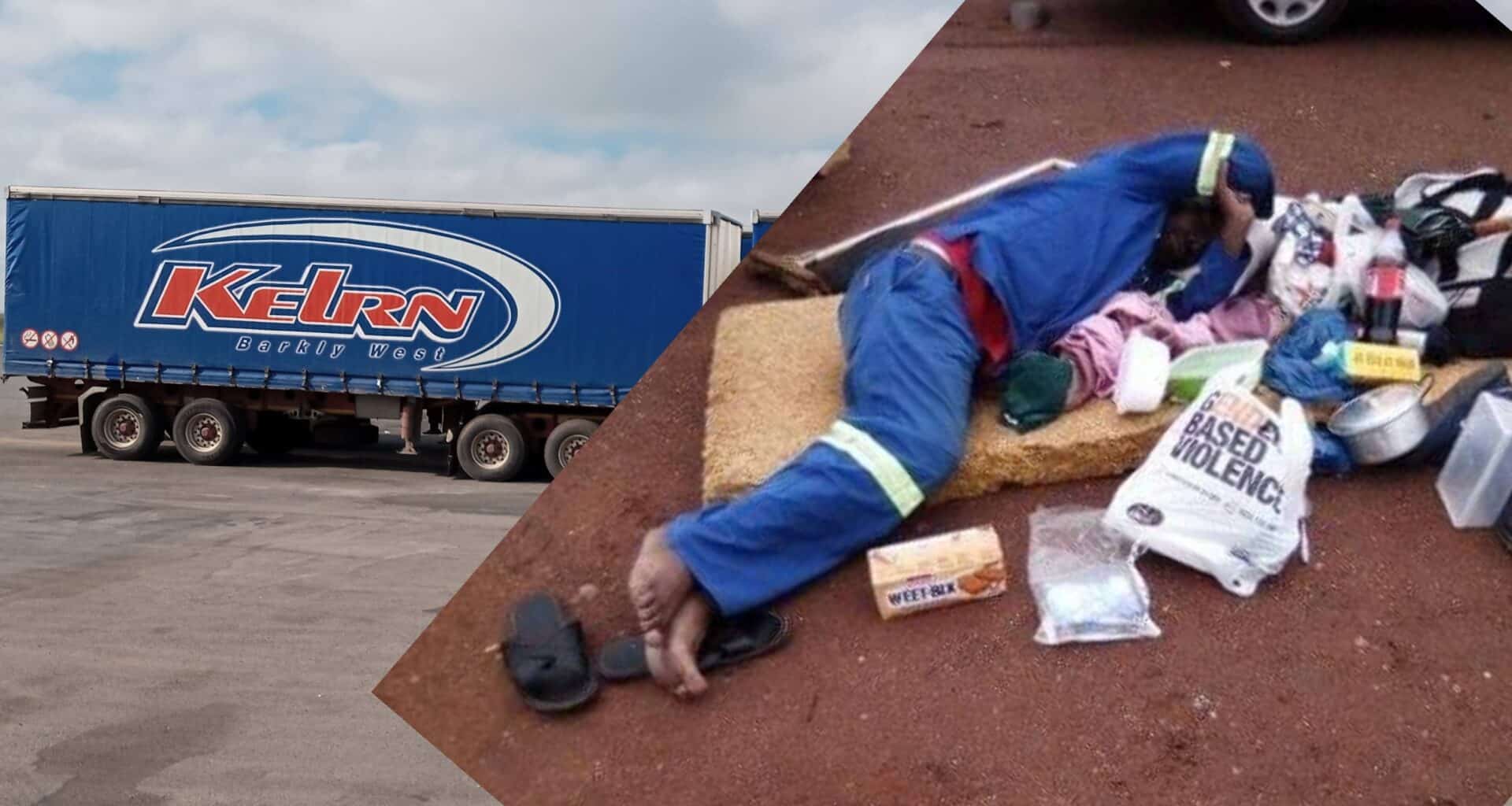 Sick Kelrn Vervoer truck driver neglected, made to sleep on the floor by his company

Social media has been ablaze for the past few days after images of a sick and neglected Kelrn Vervoer truck driver surfaced. In one of the pictures, the driver, identified as Amos Ndabeni, was pictured lying on a dusty floor with his belongings scattered around him.

This did not go down well with fellow truck drivers who demanded that Kelrn Transport face the music for neglecting their driver in his time of need.

Speaking to SA Trucker, Ndabeni said on Thursday, 5 February 2021, he fell sick at a customer in Brits that he even failed to open the sail.

Upon seeing the man struggling, the client organised staff to help him.

“I had already contacted my manager, Zak, who just laughed at me and dropped the call,” Ndabeni said.

The client then called Kelrn Vervoer informing them of the dire situation at hand and they promised to send a bakkie.

“When I finished loading, the client closed my sail for me and I went back onto my bed waiting for the bakkie, which never arrived,”

“I rolled in pain that afternoon and the whole night without any attention until the following morning when the client reported back for work,”

“He was surprised to see me there and went straight to contact my company,” Ndabeni added.

The client then told Ndabeni that his company said the bakkie was on it’s way and would arrive between 2pm and 3pm that day.

Eventually, the bakkie arrived and took Ndabeni to hospital where a doctor examined and gave him some medication.

“I refused to be admitted preferring to go home where my wife would take care of me,”

SA Trucker contacted Zak for comment of which he replied the matter was being handled internally.

On Wednesday Kelrn Vervoer released an unsigned social media statement in which they expressed shock in how the matter was handled saying it does not reflect their values and way of handling issues.

Kelrn Vervoer management clarified that Ndabeni chose to ride at the back of the bakkie not that he was forced to as alleged on social media.

“I could hardly sit, yes it was my choice to sit at the back of the bakkie,” confirmed Ndabeni.

When he was discharged he was taken to Kelrn premises in Pomona where he was forced to sleep in the bakkie because there was no room for him to lie in.

Commenting on the picture taken with Ndabeni lying on the floor with his stuff scattered around, Kelrn says it’s the time when they were preparing a room for him.

“They are lying, when my children came to fetch me they found me lying there on the floor,”

“The bakkie driver came and told me that he needed to use it so I should come out, did I have a choice?”

He says that no room was created for him.

Seeing the neglect he was subjected to, Ndabeni says that he asked Zak to allow him to go and recover at home but he demanded a sick note saying without it he would not approve.

“My children came and took me home in Hoopstad finding me on the floor, they took the pictures when they arrived, Zak should not lie that he cares,” Ndabeni said in conclusion.

As if it's a truck breakdown, Kelrn Vervoer sent a bakkie to fetch their sick driver and it took 24hrs to finally arrive while the man rolled in pain in the truck https://t.co/NyAsuylSvf pic.twitter.com/r252p4DR8L

Nhlonipho Zulu, the taxi driver who helped a woman give birth inside…