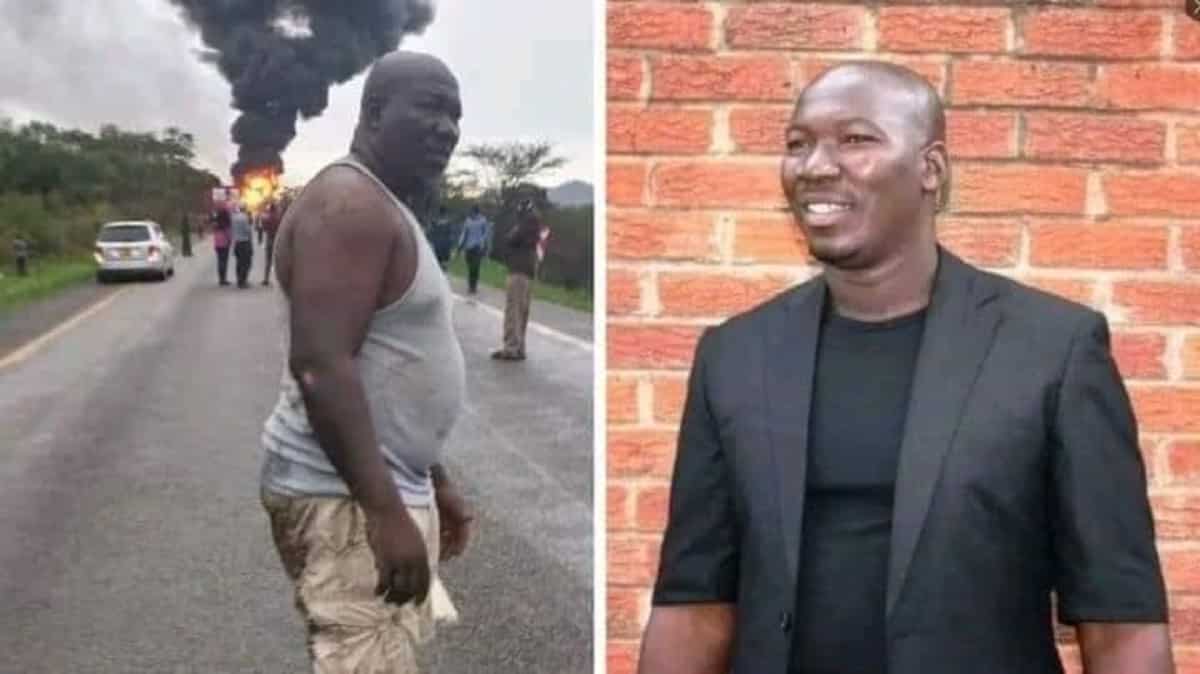 Sirizani Butau, The Hero That Rescued 8 People From Burning Bus

Sirizani Butau has become an instant hero after he endangered his life to rescue passengers of a burning bus near Mutare in Zimbabwe on Christmas eve.

Butau was one of the first people to arrive at the scene of a horrific crash involving a fuel tanker and a fully loaded bus on the busy Harare-Mutare highway on Thursday evening.

A Beta bus collided with a fuel tanker and burst into flames trapping all the occupants inside.

Without considering his own safety, Butau jumped into the bus and helped out at least 8 passengers.

It wasn’t smooth sailing as he sustained burns all over his body. For saving 8 lives it was a small price to pay.

Pictures shared on social media shows a burned and bruised Butau just after accomplishing his mission.

Zimbabwe Republic Police (ZRP) reported that 4 people, unfortunately, perished in the fiery crash. The tanker truck driver and his passenger and two passengers from the bus.

Nyathi further reported that the accident may have been caused by a drunkard pedestrian. The driver of the bus was allegedly avoiding knocking a drunken pedestrian when he swerved onto the path of the oncoming fuel tanker.

The two collided and instantly burst into flames. Some passengers kicked out the emergency exit panels and escaped the fire while Butau rushed to help those vulnerable who couldn’t help themselves.

According to reports, the deceased passengers were entrapped when the vehicles collided hence they could escape the fire.

Sirizani has been hailed a Christmas Hero. Responding to requests to donate to him, Butau said,”..I did not do what I did to become a hero…I did what I did just to try and save lives, so it’s not about fame or what, so anyone who wishes to exchange their gratitude … can just do so…”

This man saves 8 people from a burning bus in Zimbabwe, this is a true hero, his name is Sirizani Butau pic.twitter.com/rIKslh7yGj

Cape Town – A new test could change the way employers and…

This website uses cookies to improve your experience while you navigate through the website. Out of these, the cookies that are categorized as necessary are stored on your browser as they are essential for the working of basic functionalities of the website. We also use third-party cookies that help us analyze and understand how you use this website. These cookies will be stored in your browser only with your consent. You also have the option to opt-out of these cookies. But opting out of some of these cookies may affect your browsing experience.
Necessary Always Enabled
Necessary cookies are absolutely essential for the website to function properly. These cookies ensure basic functionalities and security features of the website, anonymously.
Functional
Functional cookies help to perform certain functionalities like sharing the content of the website on social media platforms, collect feedbacks, and other third-party features.
Performance
Performance cookies are used to understand and analyze the key performance indexes of the website which helps in delivering a better user experience for the visitors.
Analytics
Analytical cookies are used to understand how visitors interact with the website. These cookies help provide information on metrics the number of visitors, bounce rate, traffic source, etc.
Advertisement
Advertisement cookies are used to provide visitors with relevant ads and marketing campaigns. These cookies track visitors across websites and collect information to provide customized ads.
Others
Other uncategorized cookies are those that are being analyzed and have not been classified into a category as yet.
SAVE & ACCEPT
Total
35
Share
35
0
0
0
0