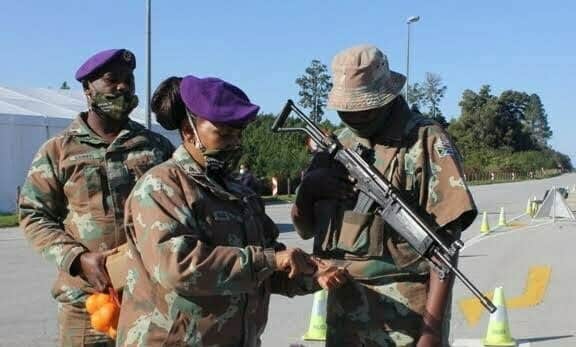 Following the recent disruptive truck blockades on the N10 and N3 national routes by local truck drivers against the employment of illegal foreign nationals, the SANDF has deployed soldiers on the highways to make sure it does not happen again.

Protesting South African truckers have often ignored calls by the government to not block roads but resolve their issues through negotiation.

In the wake of the lawlessness, SANDF will be taking over the law enforcement and security duties on South Africa’s troubled highways.

On Thursday, Defence and Military Veterans Minister Thandi Modise said the impact of the disruptive truck blockades was felt not only in South Africa but also affected countries in the region.

“You may recall that just before the local government elections we said we have an interest, as the military, to look after strategic infrastructure. We have been in discussion since with the minister of police, and defence has agreed to take over just the toll roads and the toll gates specifically,” Modise said while addressing a briefing of the government’s Justice, Crime Prevention and Security (JCPS) cluster in Pretoria.

“That decision was taken because we cannot afford a situation, as a country, where trucks block very strategic economic routes which not only affect South Africa but it affects the whole of SADC. With that in mind, we had already started looking at how we will deploy, to do that.”

She said, “if there is any issue which might create any uncertainty to life and limb, property, the economic interests of the country the (Department of) Defence gets interested”.

She said in the wake of the high court ruling which ordered that former president Jacob Zuma return to jail to serve his 15-month sentence, the SANDF “will not hesitate” if approached to be on standby amid fears of a repeat of wide-scale riots witnessed in July when Zuma was incarcerated.

“We had not actually decided to be on standby simply because there is a court ruling. We were on standby to jump into the toll routes because we have been observing this trend of trucks that keep on hindering the free movement of innocent South Africans and affecting the standing of this country internationally,” said Modise.

The Road Freight Association (RFA) condemned the actions of the protesting truck drivers who he says chose to work outside the law.

An inter-ministerial task team was formed three years ago to deal with the employment of illegal foreigners but it seems there has been no political will to deal with the matter, RFA CEO Gavin Kelly told eNCA after the N3 truck blockades at Van Reenen’s Pass on December 3.

Kelly said that South Africa was fast losing respect as a safe, efficient and desirable route for the movement of goods.

The SANDF deployment on key routes of the country is expected to bring peace and confidence to motorists.