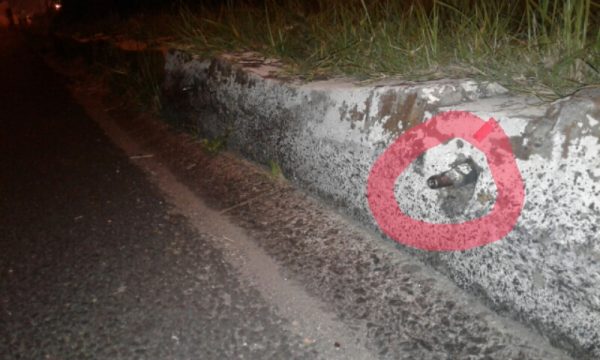 Durban truck drivers and those who frequent the Durban Harbour are crying foul over spikes discreetly laid along Langerberg road and causing damages to truck tyres so often.

This SA Trucker correspondent on 14 March 2018 around 19h30 witnessed two local trucks burst three tyres in a space of under an hour. Coincidentally both trucks were from the same contractor whose depot is on the same road.

As truck drivers gathered around the second truck they could not help but feel sorry for the driver who would most likely be made to pay for his ‘mistake.’

It is unfair though for the truck driver because the spikes are not easily noticeable from his position. It boggles minds also why the spikes were placed on the road edge.

What’s worse is that the wheel does not have to touch the road edge to be punctured, hence the driver will think he is monouvring safely until all of a sudden he hears the terrifying pshhhhh sound.

The problem is fuelled by some trucks who park illegally along the road, a problem that has existed for far too long, coupled with trucks queueing to go into Grindrod’s Unitainer depot which then eats up the inner lane to leave a very small space for the big trucks.

Disaster strikes when the driver tries to squeeze on the small gap left for him.

While it has not been confirmed, older drivers say back then before the new A check holding area was introduced trucks used to queue on Langerberg road before going straight into Durban Container Terminal Pier 2.

It is suspected that the port authorities put the spiked concrete pillars to stop trucks who would jump the queue by skipping the pavement and use the lane for private cars.

The new staging area averted that problem since the trucks now park in the staging before proceeding into the terminal.

If at all that was the reason, it would mean the spikes are way outdated and their prolonged existence will only cause more unnecessary costs to the trucking company and in some cases the driver too.

DCT Pier 2 yard manager was not immediately available for comment. The article will be updated once his comment is obtained.