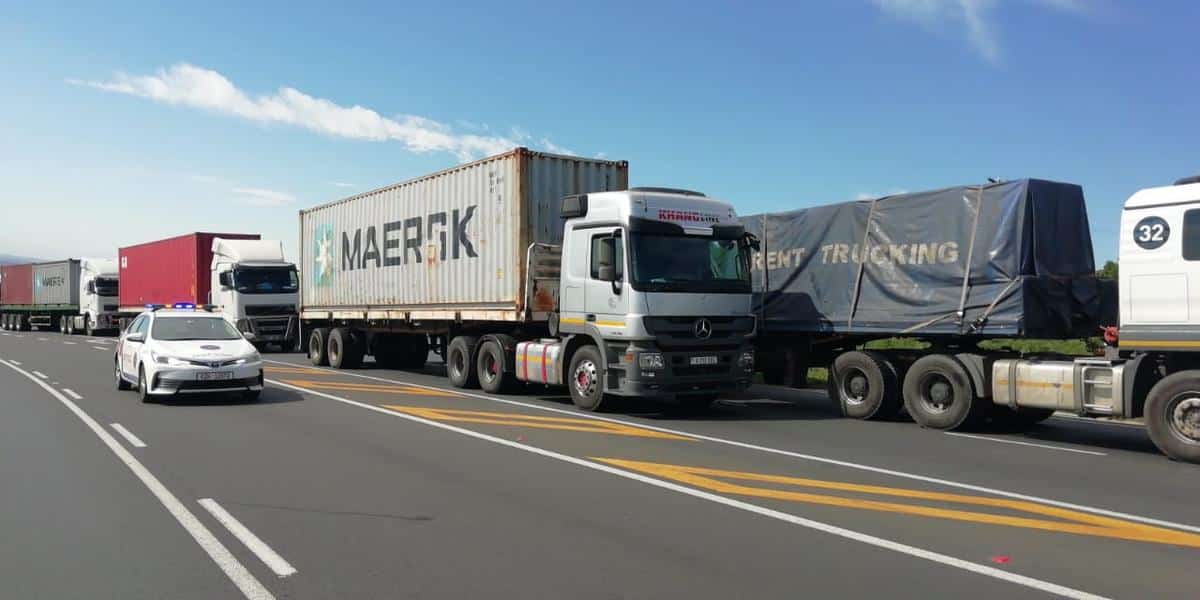 The truck blockade at Van Reenen’s Pass on the N3 has been cleared and the freeway is open on both directions, the N3 Toll Concession (N3TC) has confirmed.

Protesting truck drivers blockaded the
N3 in both directions since the early hours of Friday morning, forcing a lengthy traffic backlog.

According to police spokesperson Warrant Officer Basheer Khan, arrests have been made and the SAPS are currently dealing with the matter.

“Police at the scene are trying to clear the area,” said WO Khan.

The freeway was opened to traffic in the early hours of Saturday morning.

05h05 04/12 #N3TrafficUpdate: #N3Obstruction N3-6X Km 60 near #VanReenen. The scene has been cleared and the road is OPEN to traffic. Thank you for your patience.

The organisation says their members resorted to the action after their concerns went unheard.

Mofokeng accused government of doing nothing about the high unemployment rate.

“Who is actually causing the high unemployment rate? It is these foreigners and now the government is also standing on their sides whereas we are raising genuine issues. These people are even driving without valid permits and licences and our government is doing nothing about that. You know how many positions have been declared redundant because of the foreigners because once a foreigner has been employed they can multi-task, my brother. Now we don’t have people as assistants, that is what is happening there in the KZN area. These people are getting many and many in the industry.”

In a stranger than fiction tale in Zimbabwe, a trailer has remained…

This website uses cookies to improve your experience while you navigate through the website. Out of these, the cookies that are categorized as necessary are stored on your browser as they are essential for the working of basic functionalities of the website. We also use third-party cookies that help us analyze and understand how you use this website. These cookies will be stored in your browser only with your consent. You also have the option to opt-out of these cookies. But opting out of some of these cookies may affect your browsing experience.
Necessary Always Enabled
Necessary cookies are absolutely essential for the website to function properly. These cookies ensure basic functionalities and security features of the website, anonymously.
Functional
Functional cookies help to perform certain functionalities like sharing the content of the website on social media platforms, collect feedbacks, and other third-party features.
Performance
Performance cookies are used to understand and analyze the key performance indexes of the website which helps in delivering a better user experience for the visitors.
Analytics
Analytical cookies are used to understand how visitors interact with the website. These cookies help provide information on metrics the number of visitors, bounce rate, traffic source, etc.
Advertisement
Advertisement cookies are used to provide visitors with relevant ads and marketing campaigns. These cookies track visitors across websites and collect information to provide customized ads.
Others
Other uncategorized cookies are those that are being analyzed and have not been classified into a category as yet.
SAVE & ACCEPT
Total
41
Share
41
0
0
0
0