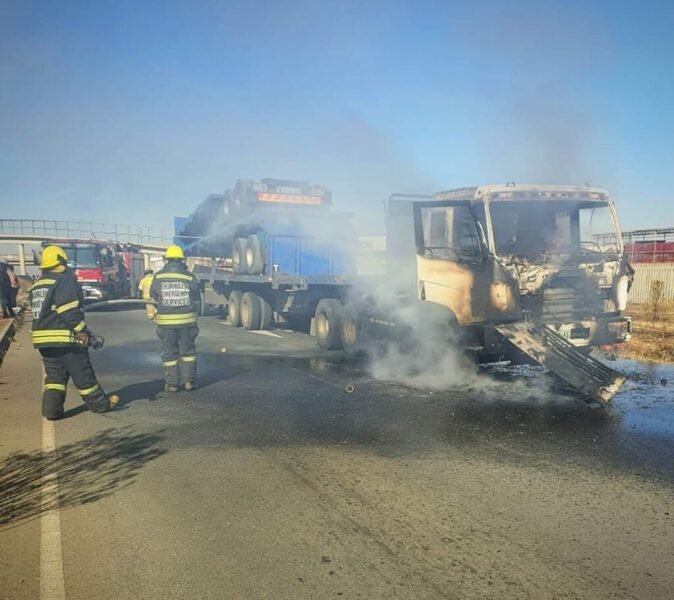 The interdict, issued against the planned strike essentially warned the All Truck Drivers Foundation (ATDF) and Sifiso Nyathi to desist from organising, encouraging or inciting any protest action or national truck shutdown against the employment of foreign nationals.

The court ordered that ATDF cease and desist from physically or otherwise preventing, obstructing or interfering in the normal operations of commercial trucks in the republic.

The first reports of disturbances came from Johannesburg where a mob forcefully stopped trucks and used them to block the M2 West.

Four trucks were reported to have been damaged during the blockade.

Confirmed: Protest on the corners of Vickers Rd and the M2 Highway at City Deep Truck Stop. Protesters are targeting trucks, please avoid when in area.

Johannesburg Metro Police spokesperson Wayne Minnaar at 13h25 said, “Officers were able to move the obstruction and traffic was able to flow. The situation is calm at the moment.”

On the N1 just after the Huguenot Tunnel towards Cape Town, trucks were also parked across the highway causing a huge backlog of traffic on both directions.

In Durban, a truck was used to block the M7 below the N2 freeway while another one was allegedly petrol-bombed on the South Coast road.

HeraldLIVE reported that truck drivers in Nelson Mandela Bay in the Eastern Cape are also in support of the nationwide truckers’ protest and have gathered outside the Swartkops truck stop to demonstrate against the hiring of foreign nationals.

Protesters also used trucks to block the N11 between Newcastle and Ladysmith at Dannhauser turnoff, passed.

Who is the ATDF?

All Truck Drivers Foundation (ATDF) is a group of local South African drivers advocating for 100% employment of locals.

They are a militant group who have often clashed with law enforcement over their way of protesting.

A few of its members were charged for arson after they burnt trucks during another strike back in 2017.

ATDF has been campaigning against the employment of foreign nationals, claiming that there are enough unemployed drivers to take over the jobs being done by immigrant drivers.

ATDF spokesperson Michael Masimini, in an interview with eNCA, said the national protest is for truck drivers and for those South African citizens who are unemployed.

Masimini said employers who have foreign truck drivers in their companies are in contravention of the Employment Services Act.

“This is not only the ATDF strike, this is national. We are engaging ourselves in this peaceful strike as we are trying to draw attention to our government that we as South African citizens and unemployed ones, we do have employment. All that we are saying is we need them to tell us a date or a day to say they are taking off all the foreign national drivers on the truck so that our people can actually begin to work,” said Masimini.

South African Transport and Allied Workers Union (Satawu) has, however, distanced itself from the protest action.

“It has been our stance before and it is still our stance – all issues pertaining to workers in that industry have a platform to negotiate through the bargaining council,” Satawu general secretary Anele Kiet told TimesLive.

“We are a member of the bargaining council and could never be the ones who would walk out of that particular structure to call for a shutdown,” added Kiet.

Meanwhile, Labour and Employment Minister, Thulas Nxesi have said that urgent efforts are underway to try and resolve the truck drivers’ complaints.