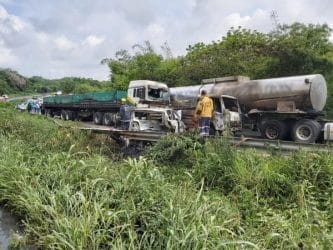 Durban – A tanker driver has been taken into custody after a truck driver was killed in a fiery crash between three trucks and six cars near the Bellville Road off-ramp on the M7 in Durban on Wednesday, KwaZulu-Natal police said.

“Malvern police are investigation a case of culpable homicide and circumstances around the incident,” said Colonel Thembeka Mbele.

Mbele said a tanker allegedly crashed into a number of vehicles at around 9h00 and caught fire.

The fire spread to several vehicles seriously injuring their occupants.

Rescue Care paramedics’ Garrith Jamieson said earlier from the scene there were multiple injuries as a result of the massive crash.

“As you can see, the vehicles caught alight and one person has been deceased,” he said.

Two helicopters from Lenmed and Netcare 911 were among the first responders at the accident scene.

Netcare 911’s Shawn Herbst said reports from the scene indicated that a tanker and a construction vehicle were involved in the accident which led to the vehicles bursting into flames.

He said in addition to the fatality, six people had sustained moderate injuries, while two were seriously injured.

Police were also on the scene to assist.

The burning truck had been extinguished at the time of writing. The M7 was closed to allow emergency services to work.

Ambulances were rushing people to hospitals for further care.

Images from the scene show burnt-out cars and trucks sandwiched in between each other next to a barrier.