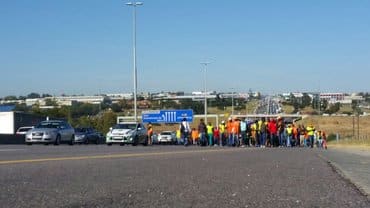 On Wednesday Teti Traffic project manager Karen Venter said: “On Friday, we agreed that the strike will take place at the circle at the intersection of Rietspruit Road and Waterberg Road (The Rietspruit Circle) until such time as picketing rules are concluded. However, the union and its members have engaged in unlawful conduct by blockading the New Road off-ramps and they have obstructed traffic northbound, southbound and on Rietspruit road. This is unlawful.”

SATAWU members took to the N1 freeway in Midrand on Tuesday, blocking motorists for up to 60 minutes. Teti Traffic was then granted an interim interdict preventing members of SATAWU from disrupting traffic.

Venter, who apologised to motorists for the inconvenience, said that Satawu had refused to budge on their demands during wage negotiations which began in October last year.

“Teti is offering a seven percent salary increase but Satawu is demanding over 130% increase,” said Venter. She added that the union’s demands were unreasonable and unaffordable.

She said Satawu members had acted unlawfully so Teti went to the Labour Court where they were “granted an interim interdict.”

Venter said the interdict was valid until May 17 and stated that Satawu members “are restrained from picketing, congregating, assembling, demonstrating or protesting around or near any place other than the location specified, obstructing vehicles and persons around or near the location identified or any other road, including freeways and more particular the N1 freeway”.

Venter added that the interdict also prevented union members from “engaging in any acts of misconduct and or violence whilst participating in the picket, preventing employees or any other persons from tendering their services in terms of the contract of employment”.

The interdict also prevented them from damaging and destroying property and carrying dangerous weapons and objects, “including guns, knobkerries, sticks, bricks stones spears, assegais, axes, bats or any other dangerous objects which are likely to cause injury”.

She rejected claims that the workers had not received any salary increases since 2012.

The company, she said, “embarked on a benchmarking exercise last year and adjusted salaries to align them to industry trends”. Venter noted that because Satawu rejected the seven percent increases, such increases have not been implemented yet. “It was therefore misleading to say the workers had not received any increases since 2012.”

Cape Town – Schoolchildren were among the looters who raided a truck…

Durban – After eight months of suffering from burns wounds sustained during…