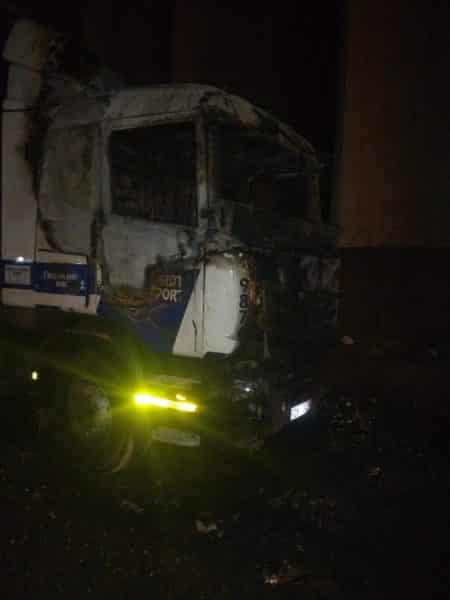 Three suspects are in police custody after they were arrested on Saturday for robbing truck drivers in Harrismith on Saturday afternoon.

The trio is alleged to have forced the trucks off the road between Mont Vista and Harrismith before robbing the drivers of the truck keys and belongings.

The attacks happened around 12h00 on Saturday afternoon.

SA Trucker spoke to one of the victims on condition of anonymity, he alleges that the suspects were driving in a blue Nissan Tiida when they waved him to stop on the side of the road.

He said he ignored because he did not know who they were and drove on, but they pointed something at him while the car slowed down to block his truck.

The victim managed to take the car registration plate and sent it to his controller before he could stop.

After they managed to stop him, three people from the car approached and pulled him from his truck.

They pushed and shoved him while asking when he would go back to his country claiming they were ATDF members.

One of the suspects climbed into the truck and helped himself to the victim’s wallet and cellphones.

The suspects took away the truck keys and sped off.

In no time a SAPS van passed by and the victim stopped it to ask for help. Armed with the description of the car and the suspects the cops went after the suspects.

At around 17h00 the detectives made a breakthrough when they stopped the suspects in Harrismith town. The suspects were found in possession of three sets of truck keys, cellphones and cash stolen from three trucks.

They had thrown away the sim cards.

Apparently, the vehicle registration used was a fake one but excellent work from Harrismith detectives ensured that the suspects were apprehended about five hours after committing the robbery.

The suspects are making their first appearance at Harrismith court today.

Four cases of robbery have been opened against the three suspects after detectives learnt that the suspects attacked four trucks on the same day.

Meanwhile, on the same day at around 13h00, another truck driver was attacked in Durban by four men who said they were from the ATDF, they took the truck keys and disappeared.

During the night that truck was sprinkled with petrol and set alight with the driver inside.

The truck was parked outside a client on South Coast road in Mobeni.

When SA Trucker spoke to the victim who refused to be named for obvious reasons, he said he was lucky that the attack happened when he was still awake because he managed to jump out and run for dear life.

It definitely could have been worse had he been late to discover the danger he was faced with.

He, however, lost his identification and driving documents, cellphones and cash in the fire.

These attacks were done on the same group of transport companies known to SA Trucker, we will however not make it public at this stage.