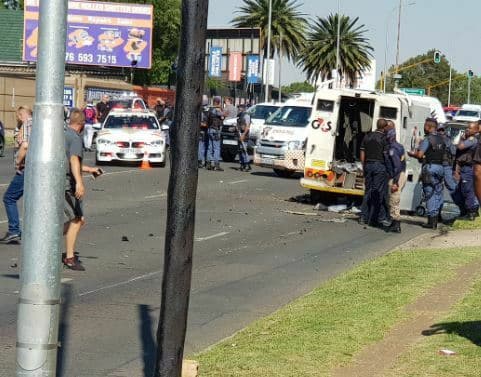 A tow truck driver was shot and killed when he chased after fleeing cash-in-transit robbers just after they allegedly robbed a G4S cash van in Johannesburg on Friday morning.

Netcare 911 spokesperson Paul Herbst said just before 08:00, paramedics responded to a shooting on the corner of Hendrik Potgieter and Ontdekkers Road in Florida, west of Johannesburg, where a cash-in-transit robbery had taken place and an armoured van was bombed.

“One security officer had sustained minor injuries and was treated on scene before being transported to hospital”, Herbst added.

Later, ER24 paramedics were called to 14th Avenue a few kilometres north for a second shooting incident, believed to have been related to the cash-in-transit heist.

“Assessments showed that he had sustained a fatal gunshot wound to his chest”, he added. “Nothing could be done for him and he was declared dead.”

Early reports suggest the incidents were related, and that the tow truck driver was shot after he followed the gang, who were reportedly travelling in three vehicles.

Reports online are that after interviewing witnesses on the scene the three G4S guards were arrested.

Eight Bags of money with an estimated value of R2.2 Million was found hidden in a dustbin on a premise next to where the van was attacked.

A further R1 million was found hidden in the van under the seat of the crew.

It has also been reported that video footage further indicates that the money was handed to the CIT suspects prior to them blowing up the cash van.

The G4S guards were detained at SAPS Florida on the charges of murder, armed robbery and attempted murder.

SAPS, however, has remained tight-lipped on the reported arrests.