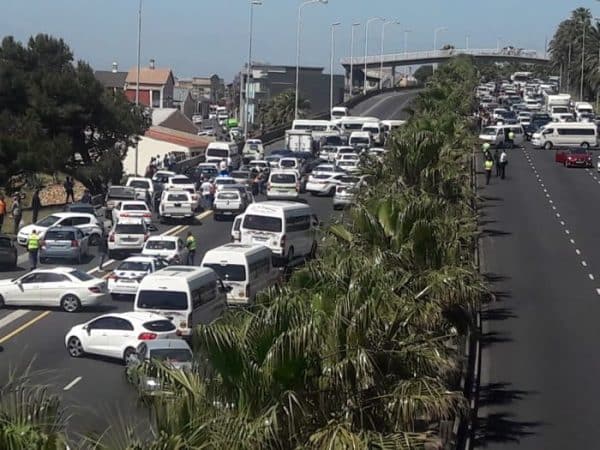 Taxi drivers have been causing disruptions this week in protest against warrants issued in an operation by the City of Cape Town.

The City of Cape Town says traffic on multiple routes leading out of the CBD has been largely cleared.

Minibus taxis had blocked major routes, including the N2 highway at the M5, causing heavy delays for those leaving the city.

The SAPS is still on the scene maintaining order. Traffic is blocked in certain sections in the Cape Town CBD and parts of Woodstock. pic.twitter.com/tsGc1ocucN

The city’s mayco member for safety and security JP Smith says at least 23 taxis were towed away by traffic authorities on Friday afternoon.

Law enforcement has also been deployed to the CBD bus terminal where taxi drivers are reportedly attacking commuters who want to board Golden Arrow buses.

All roads have been cleared. Confirmed with traffic.

Traffic officials in Cape Town say the N2 has been reopened for traffic after taxis earlier blockaded both the in – and outbound lanes of the national highway. Tow trucks have removed the parked taxis that were blocking the highway. #sabcnews

There are also some attacks by taxi drivers on the commuters trying to board Golden Arrow buses.

Taxi drivers have been protesting against the issuing of warrants and the impounding of illegal operators.

They also caused disruptions in the CBD earlier this week, blocking the area around the station deck and smashing a number of Golden Arrow bus windows.