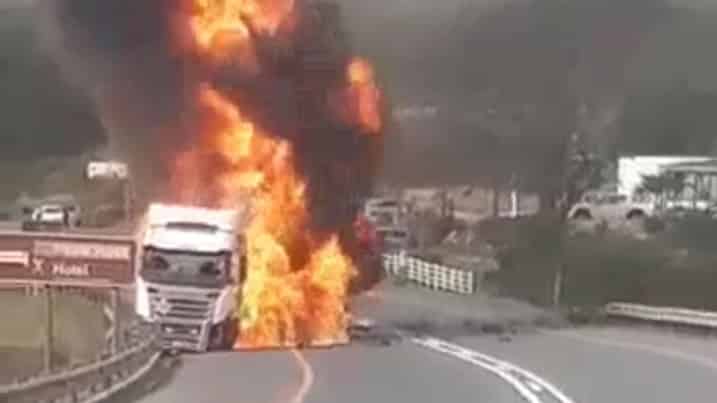 A heart-wrenching video of a man throwing himself onto a burning truck in an apparent suicide has flooded the social media.

The horrific scene played out Saturday afternoon on N2 at Houw Hoek Pass in the Western Cape.

A trucker on the scene told SA Trucker that the man in the video was travelling with his wife in their Renault Duster when it collided with the truck and veered off the road.

“The truck caught fire on impact, being a petrol tanker, the trucker jumped out and fled to safety.

“Meanwhile, the car crashed through the Armco Barriers and down an embankment and crashed onto a tree entrapping the man’s wife,” he said.

“Some people on the scene tried to untangle the trapped woman but it was in vain,

“Upon realising that her wife did not make it, the man ran from the car and threw himself into the burning truck.

The tanker driver and other onlookers can be heard in the video, trying to stop the man but he jumps straight into the fire.

He is immediately consumed by the fire.

An onlooker captures the whole scene playing out even as the man burns to death.

The N2 Houw Hoek Pass was closed for several hours after the fatal crash.

MAN THROWS HIMSELF INTO FLAMES FROM FUEL TANKER ON FIRE AFTER ACCIDENT : HOUWHOEK PASS. WC. pic.twitter.com/HrCpQy1H88

Brigadier Motlafela Mojapelo says the 25-year-old truck driver was arrested at a nearby village after he failed to stop at the accident scene.

Limpopo – Five people have been killed in a truck and car…