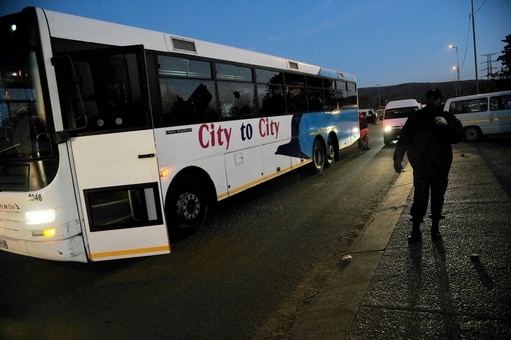 Durban – Two drivers were shot on R56 in KwaZulu Natal within a few minutes of each other on Sunday evening.

One died on the spot while the other one survived with serious injuries.

The motive of the shooting is not known at this stage.

Their colleagues at City to City and Translux have downed tools following the brutal attacks on Sunday.

According to the South African Transport Allied Workers Union (Satawu) media officer Zanele Sabela, two Translux buses carrying 56 passengers were travelling to Johannesburg when they were shot at.

Sabela said one driver died immediately and the bus crashed into a barrier which brought it to a halt.

“The second driver was shot in the stomach and he managed to apply the handbrake and brought the bus to a complete stop. He was taken to hospital and is currently in ICU,” she added.

Sabela said the buses usually leave for the same destination 10 to 15 minutes apart and “this is likely why the two drivers were attacked one after the other.”

The passengers from the two buses were later transported to Park Station, Johannesburg.

Sabela said the unions were calling on authorities to leave no stone unturned in bringing the culprits to books.

She added that the drivers have embarked on a work stoppage citing safety concerns and are calling for the minister of transport and minister of police to come and address the situation.

According to Sabela, busses belonging to Eagle Liner and African People Movers (APM) were reportedly targeted at the same spot in July.

“Thankfully, the drivers were not shot at but all the buses’ windows were smashed and the two companies have since changed routes,” she said.

“We are also pleading with those who feel aggrieved to find ways to raise their concerns without sacrificing others’ lives or property. We have all seen the devastation caused in the trucking industry and across Gauteng communities in recent weeks.

“We call on all aggrieved transport stakeholders to come out from the shadow and express their concerns in a responsible manner so the can be addressed,” she added.

The buses fall under Autopax and they had not responded to questions by the time of print.

Durban – Three men have been arrested for stealing diesel from a…