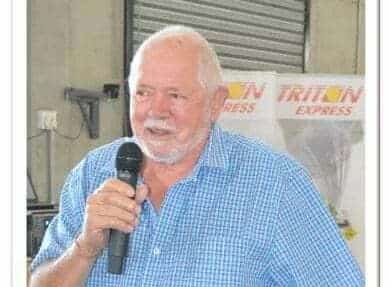 Mervin Corbishley, founder and non-executive director of Triton Express has died. Corbishley passed away on Saturday morning after suffering a heart attack in Cape Town.

Triton Express (Pty) Ltd shared on their Facebook page the sad news of his passing.

Mervyn was born in Durban on the 8th November 1939 and was educated at Durban Preparatory and Durban High School.

Mervyn began his working career in 1957, when he joined Standard Bank of SA Ltd in 1957 and worked in several branches across the region over a period of 9 years.

In 1973 he became a small shareholder and was appointed a Director in 1975. Over time, Pioneer Seed Company became the largest seed producer in South Africa, and expanded operations into Zimbabwe and Malawi. Mervyn disposed of his shareholding and retired from the company in 2002.

In 1987, Mervyn was approached by a yachting friend to provide financial backing to start a transport company. This was the birth of Triton Express in Pietermaritzburg.

Triton Express started off with only three LDVs and freight was transported as a shared load with another company, to Johannesburg from Durban.

After a rocky start, Roger Lees and Mervyn’s late son, Eric Corbishley took over the running of the venture and they spent the next year turning the company around.

With Mervyn’s help, they were able to set the foundation for the successful business that Triton Express is today.

Mervyn was a non-executive Director on the Triton Express Board up until the time of his death.

Mervyn had a keen interest in sport. In his youth he favoured sailing and received Natal colours for sailing. Mervyn also joined Eric to represent South Africa in the Flying Fifteen World Championships on two occasions.

Mervyn was a keen tennis player, he competed in endurance water ski racing and even tried his hand at motor car racing.

Over the years Mervyn has provided unwavering and generous support to Triton Express which was instrumental in helping the company to grow into one of South Africa’s leading road freight and logistics companies in southern Africa. His savvy mentorship and sharp wit will be missed by all who knew him and had the privilege of working with him.

On behalf of the SA Tucker community we extend our condolences to his family and Triton Express (Pty) Ltd.