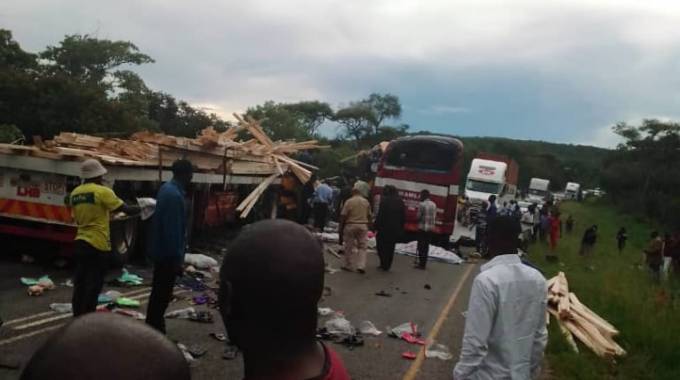 Fourteen people died on the spot in a sideswipe accident between a truck and a bus on the Harare-Mutare highway on Saturday afternoon.

“There was an accident at the 218km peg along Harare-Mutare road. The accident involved a General Bande bus and a haulage truck that was carrying timber,” Ass Com Nyathi said.

He further confirmed that the bus driver and his conductor were amongst the deceased.

Ass Comm Nyathi said the bus driver may have been overspeeding.

The accident occurred when the bus driver tried to overtake the truck resulting in a sideswipe collision with the truck.

“14 people died on the spot while 40 people sustained various injuries. The injured have since been taken to Mutare Provincial Hospital,” he said.

Videos of the horrific scene made rounds on social media from Saturday afternoon.

Several bodies were strewn all over the scene.

Ass Comm Nyathi said that there were too many fatalities and injuries because the timber came off the truck and pierced through the bus killing and injuring the passengers.

The truck driver was not injured in the accident.