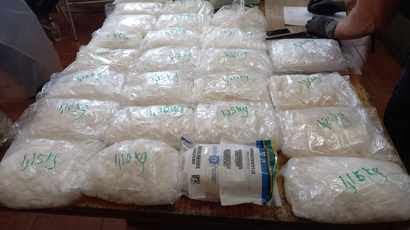 Cops from the Worcester K9 unit made a massive drug bust when they stopped a truck on the N1 highway for a routine check on Sunday.

The truck was travelling towards Cape Town.

The police officers discovered a consignment of methamphetamine (tik) with an estimated street value of R4.5 million before arresting two men aged 25 and 54.

Police spokesperson Joseph Swartbooi said:
“The provincial commissioner of the Western Cape police, Lieutenant-General TE Patekile praised the arresting officers for their contribution to tackling the drug trade in this province, especially now that the festive season is upon us.

“Once charged, they (the suspects) are expected to make a court appearance in the Worcester Magistrate’s Court on a charge of dealing in drugs. The circumstances surrounding the case are now being investigated by the Directorate for Priority Crime Investigations.”

SA Trucker urges truckers to be vigilant during this period towards the festive season as a lot of contraband will be moving places. Truckers should resist the urge to make a bit of extra cash because it may land you in jail.