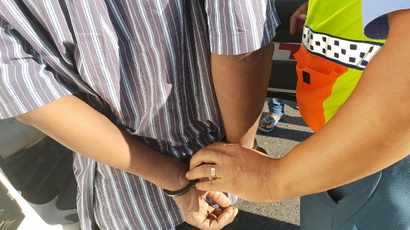 Truck driver drunk, 12 times over the limit after crashing into several cars on R21

Gauteng Traffic officials have arrested a 39-year-old truck driver for driving under the influence of alcohol.

The trucker lost control of his vehicle and plunged into several cars on the R21 on Tuesday 22 December 2020.

The male driver was arrested yesterday at around 13:00 on the R21 next to Pomona off-ramp and was immediately tested for alcohol consumption.

“We condemn this kind of irresponsible and reckless behaviour by road users, especially during the festive season where motorists are expected to save lives. Law enforcement authorities will not rest until ruthless and lawless behaviour is eradicated on our roads,” Maremane said.

“Anyone found driving a vehicle under the influence of intoxicating liquor will be charged, arrested and convicted [and sentenced to up to seven years’ imprisonment. Drinking and driving is one of the major contributors of fatal crashes resulting in loss of lives,” Maremane added.

Johannesburg – The N1 highway was closed for several hours on Friday…