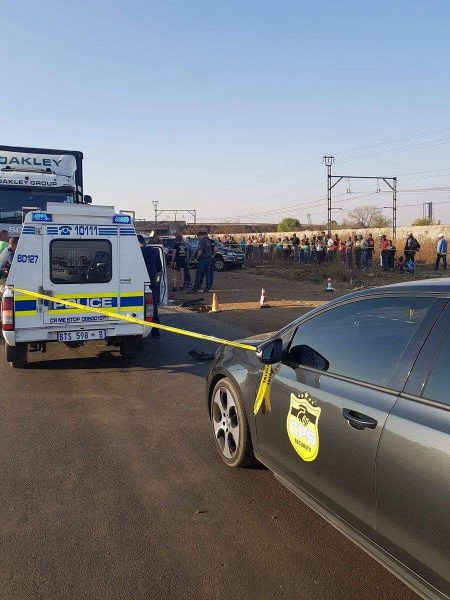 Police comb the scene for evidence, Albert's truck can be seen in the background

A Johannesburg truck driver emerged to win in a shootout between hijackers and security officers in Alberton recently.

The trucker became the hero of the day after foiling two hijackers’ bid to escape from persuing law enforcement officers.

Albert, who preferred using his first name only was driving in Mayberry Park, Alberton when suddenly a Ford Ranger crashed into his truck at high speed.

Two occupants from the bakkie came out and started shooting at a security company car which was persuing them.

“I realised at that point that these were criminals and I should act,” he said.

He armed himself with his pistol, jumped out of the truck and shot one of the unsuspecting suspects.

The other suspect surrendered when he turned around and saw Albert pointing his gun right in his face.

Albert made us truckers proud, people should not think that because we specialise in operating ultra heavy vehicles then they walk all over us. Worse when they are lawbreakers.