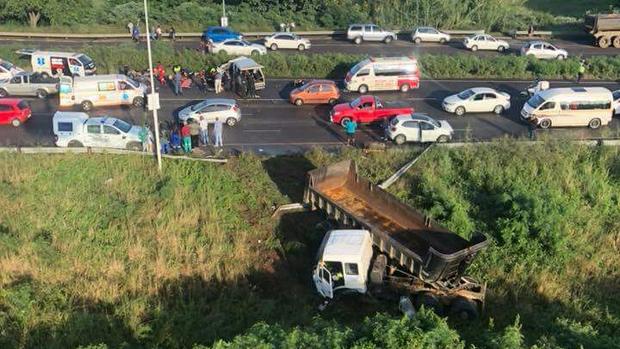 Truck driver flees scene after crashing into 4 cars in Durban

Durban – Police are on the hunt for a truck driver who allegedly ran away after colliding into four vehicles in Phoenix, north of Durban on Monday. It is alleged that the man skipped a red traffic light and crashed into the vehicles, before veering down an embankment. He then reportedly alighted from the truck and fled into bushes nearby.

Reaction Unit SA spokesperson, Prem Balram, said the incident took place at the intersection of Palmview and the R102.

“Reaction Unit South Africa received multiple calls from motorist who witnessed the accident and reported several injuries and entrapments. Emergency services converged on the scene and closed off the R102 southbound lane. The jaws of life was used to free the entrapped. Eleven patients from the four vehicles were treated and transported to various hospitals in the Phoenix and Verulam areas,” Balram said.

He said the Rusa helicopter was activated to search for the truck driver.

“After a lengthy search over a dense bush, he was spotted by the helicopter crew. Back up was called to the area, however the suspect managed to flee into a river and under a bridge. Reaction Unit officers searched the dense bush on foot but could not find the man,” he said.

It is alleged that the horse-and-trailer truck was travelling north on the R102. Balram said a witness claimed that the truck then crashed into a black Opel Corsa bakkie, a white VW Polo, a white Nissan Hardbody and a white Hyundai H100.

“The truck then veered off the road and landed in a vacant property on the opposite lane. The driver then got off the truck and fled into the nearby bush,” Balram said.

Two Trucks, a minibus taxi and a light motor vehicle were involved…