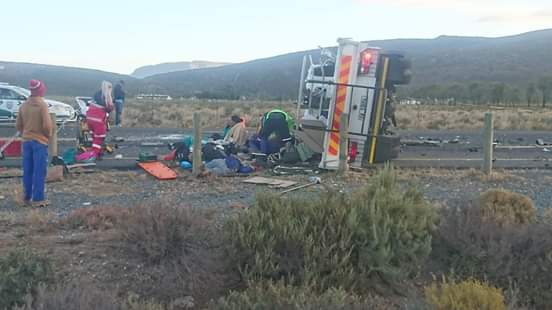 A 2-truck head-on collision that claimed the lives of nine farmworkers has been blamed on one of the truck drivers who allegedly slept off behind the wheel and encroached onto the oncoming lane crashing into the truck laden with the farmworkers.

The horrific accident in collided happened on the N1 between Touws River and De Doorns yesterday.

It is believed that at about 7am, an oncoming truck driver travelling from Cape Town towards the north had fallen asleep behind the wheel.

The truck is suspected to have veered into the wrong lane and collided with the truck carrying workers.

Initially, about 18 people were injured and six declared dead on the scene.

Later in the day, another three succumbed to their injuries. Both drivers were injured and also taken to hospital in Worcester.

Police spokesperson Andrè Traut said they were investigating a case of culpable homicide.

ER24 spokesperson Russel Meiring said they, along with Life Healthcare and the Western Cape Metro, found a number of people lying scattered around the vehicle. “Medics assessed the patients and found that six people had sustained fatal injuries.”

He said the injured passengers were tended to on the scene.

“Assessments showed that the injuries sustained ranged from critical to moderate. Paramedics treated the patients and provided several of them with advanced life-support interventions.

“Once treated, one critically injured patient was airlifted by the AMS medical helicopter to a nearby hospital, while the remaining patients were transported to nearby hospitals for further care,” said Meiring.