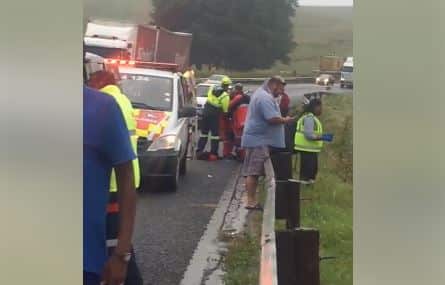 A truck driver sadly passed away on Saturday afternoon after he was knocked down by a passing bakkie on the N3 highway near Howick in KwaZulu-Natal.

The unfortunate accident happened on the N3 south bound just a few kilometres before Howick. He was apparently shooting a video of two trucks which had left the road and crashed down the embankment on the Howick hill.

Two trucks lost control and veered off the highway coming to rest a few metres down the embankment, both drivers survived with minor injuries. It is not yet known what caused the crash.

The now deceased truck driver stopped to see what had happened and disaster struck when he tried to video the two crashed trucks. He was knocked down by a passing bakkie and he died on the spot.

The deceased’s name has not been released but he worked for Chrome carriers who are based in Rusternburg, North West province.

SA Trucker advises all truckers to not unnecessarily stop at accidents scene to avoid mishaps such as these. If you really have to stop, please make sure it is safe to do so. Also make sure that you are not obstructing traffic.

Durban – Four people were killed and eight others injured in a…